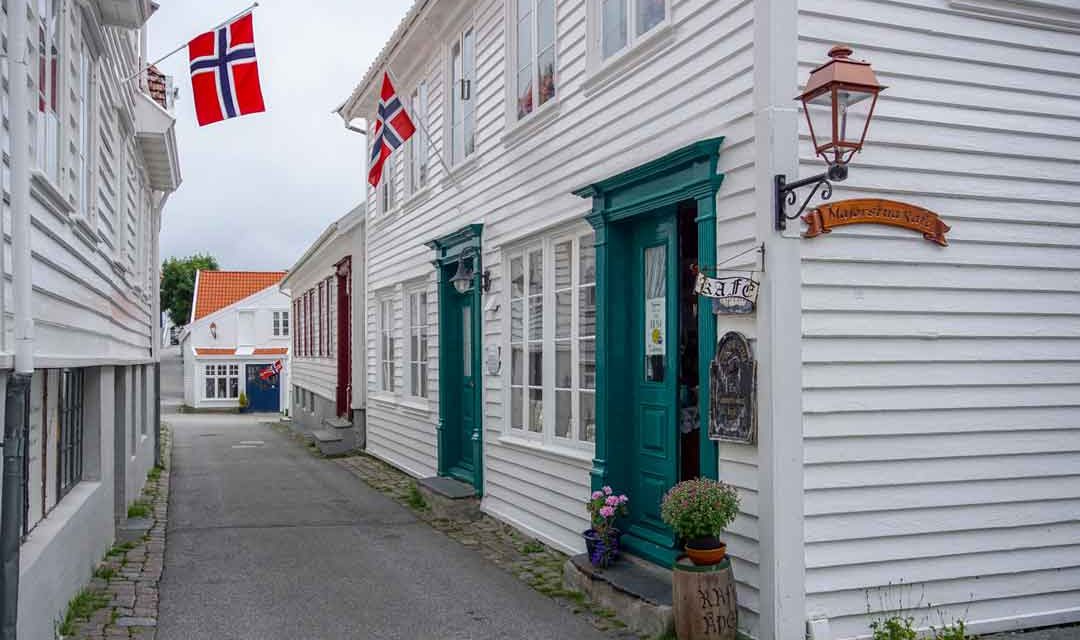 The menu offers waffles and coffee, but you can expect so much more at Majorstuen Kafe, in Gamle (old town) Skudeneshavn, Norway. In 89-year-old, Johannes Hansen’s café, you’re not just eating a waffle. Here, you’re eating a waffle with a hearty measure of laughter, a good cupful of curiosity and a sprinkling of precious memories.

The white-haired man in front of us manoeuvred himself out of his cosy leather recliner, and carefully navigated his way towards us. The room, his living room, resembled a charming antique shop with an array of curios all vying for attention around a few neatly set tables. The smell of fresh waffles hung cosily in the air, and Majorstuen kafe wrapped itself around you in a welcoming embrace.

I was at once delighted and intrigued. Figurines and dolls, teapots and lamps, books and CDs – they covered every available surface. The walls harboured paintings, photographs, porcelain plates and I even spied what looked like an old jelly mould. You could sit there for days and still not notice all the little trinkets and ornaments hiding in the myriad of nooks and crannies. 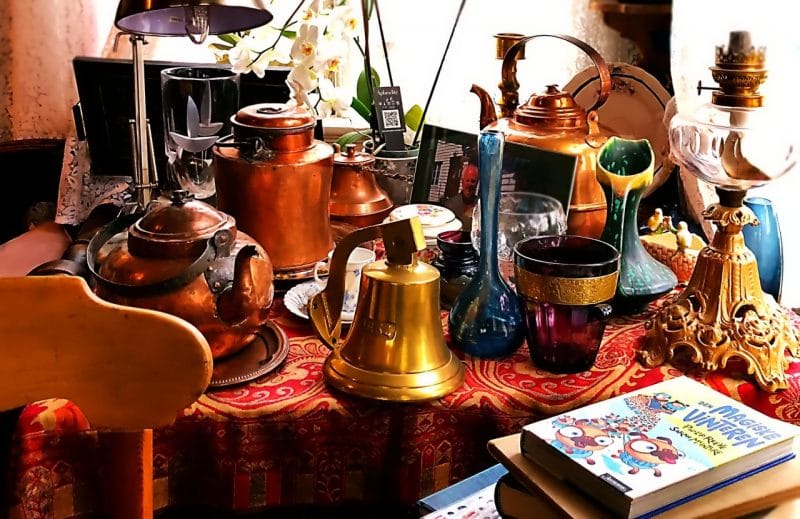 We had heard a few snippets from the locals about Johannes, the ‘famous’ waffle maker. So we decided we should find out what all the fuss was about. Funnily enough, we had nonchalantly strolled past the entrance many times already, oblivious to the treasure that lay within.

The entrance to the Majorstuen Kafe is unassuming, blending with the other iconic white wooden houses of Skudeneshavn old town. Built in 1860, with a second storey added in 1867, the house has served as a small shop, a nautical studies school, a Salvation Army home and a boating supplies shop. The name ‘Major’ derived from the time it was used by the Salvation Army. 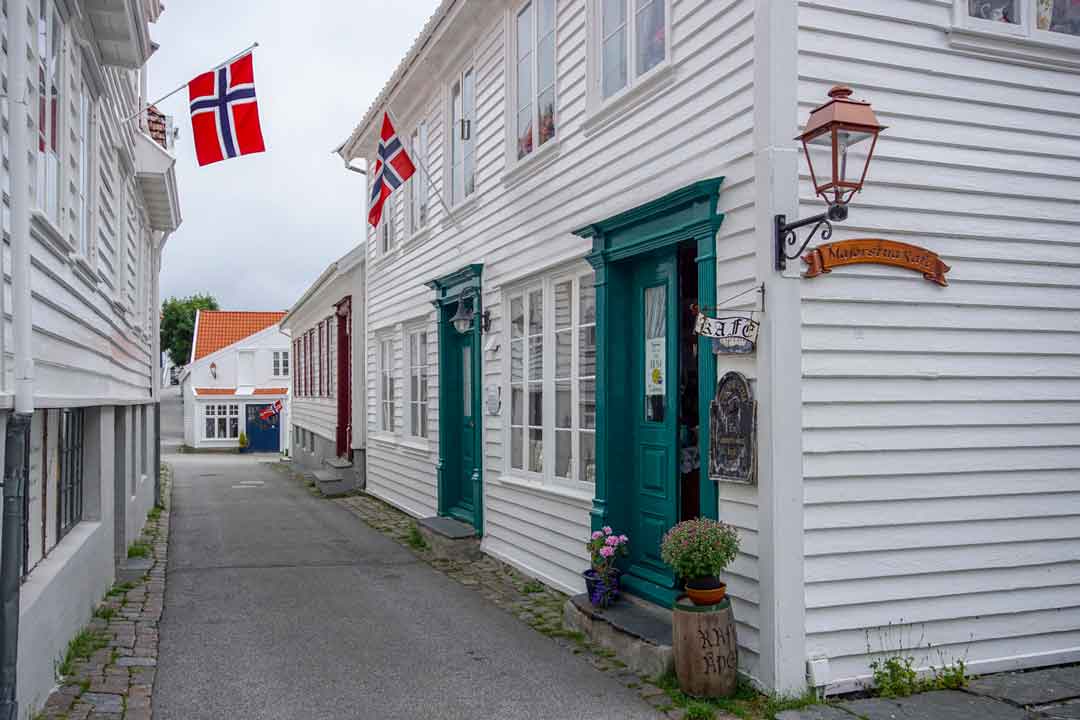 The unassuming entrance to Majorstuen Kafe

As Johannes positioned himself behind the kitchen bench, I declared that we were there to try his famous waffles. His response was a hearty laugh, the first of many while we were there. If you remember nothing else from your visit, you will remember this cheerful eruption, that punctuates so many of his sentences. 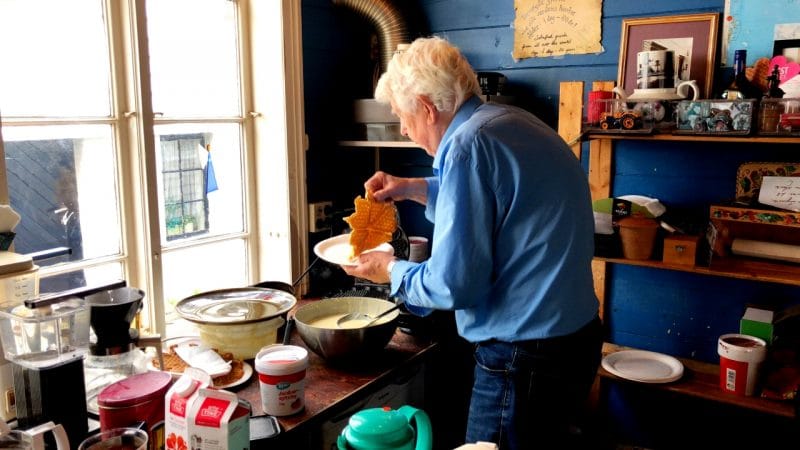 Johannes at work at his Cafe

An eclectic mix of collectables adorn the Majorstuen Kafe interior 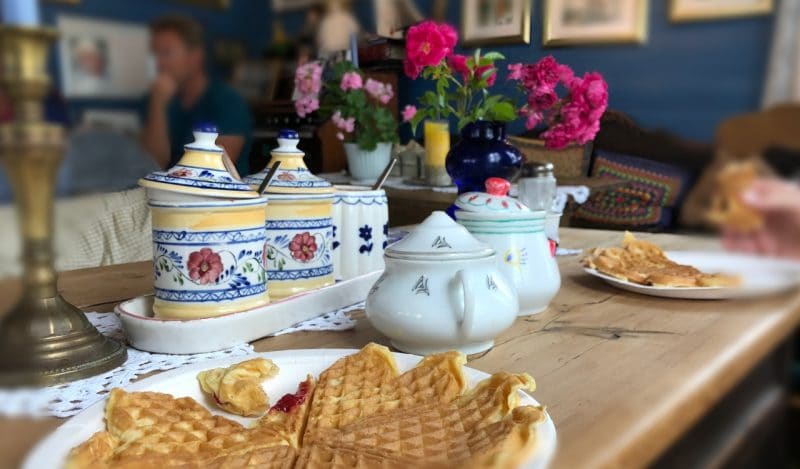 A Collector of Memories

Only as he lifted the steaming fresh waffles onto the paper plate did a slight tremble reveal his years. As we slathered jam on to these famous delicacies before us, I asked about the hundreds of artefacts around us. Johannes laughed. He had been a collector of antiques and ‘old things’  before he even started here, at Majorstuen Kafe, 25 years ago.

An elderly man, settled at the next table along, chipped in,

Everything is old here – except Johannes!

Laughter again filled the room. The same man told us he lived in Haugesund, about an hour away, but regularly came to the Majorstuen Kafe. He went on to say why,

This is the nearest I come to an Irish pub. I’ve been to many pubs in Ireland, many, many and this is the closest to it. People talking to each other and the atmosphere…

I asked Johannes if he had a favourite among his ‘collection’. He pointed to a blue and white porcelain plate hanging on the wall beside me. It was a commemoration plate of Edvard Grieg, a famous Norwegian composer and pianist. He went on to explain that he was no musician himself but very much enjoyed listening.

The white and blue plate, with the white swan on the left of the photo, is one of Johannes favourite pieces.

A colourful patchwork quilt hanging on the opposite wall caught our eye, and on closer inspection, we realised that the quilt was actually made from ties … hundreds of different neckties. The artist had named it ‘All My Men’. 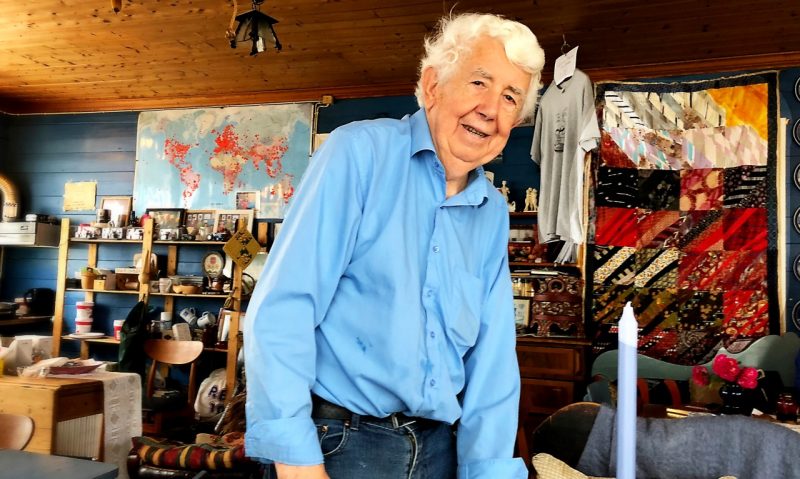 Johannes with the tie quilt in the background at Majorstuen Kafe

Sensing my interest in his treasures, he invited me to go through to the adjoining room which held more antiques and bric-à-brac. Stepping inside was like stumbling upon an old attic with a hotchpotch of riches to discover. Each piece had its own story to tell and secrets to whisper. There was no theme. A cardboard deer head held company with an antique telephone. An old pair of boots stood next to an ornate lamp. There was no favouritism here, no bias. 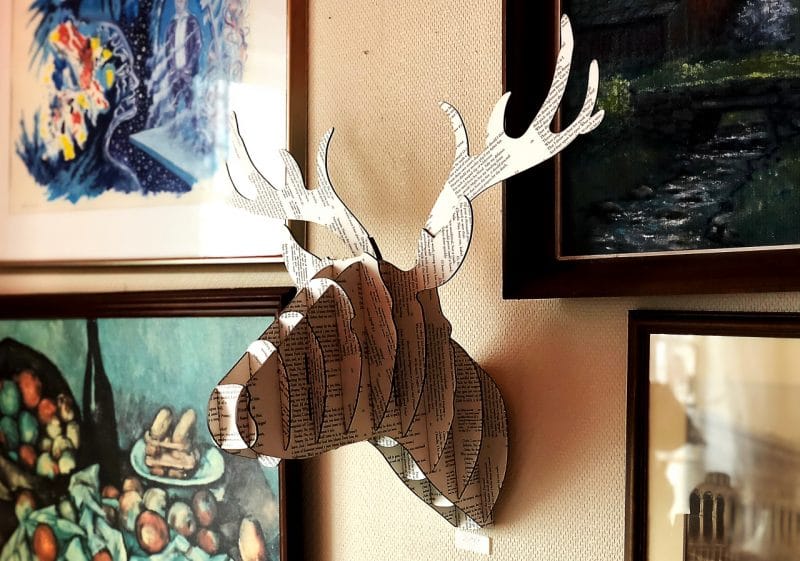 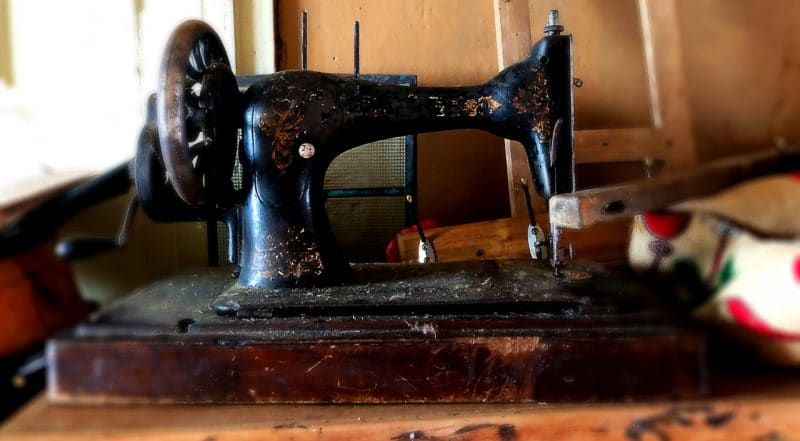 All sorts of interesting pieces

Visitors From Around the World

Before we left, Johannes asked us to put a sticker on the large world map already peppered with dots from visitors all around the world. 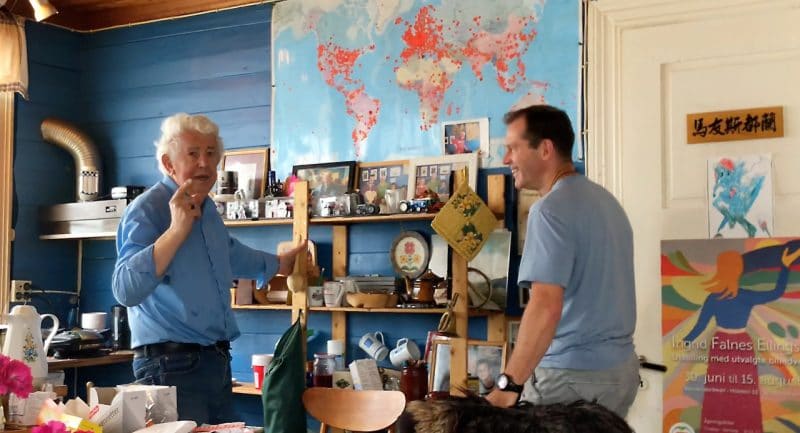 Sharing a laugh with Johannes

He then gifted us a postcard, on which was a comic style picture of Johannes himself, serving waffles. Shining with pride, he told us that it was the artwork of a young American woman, Sarah McIntyre, who had visited from America and had drawn it for him.  You got the sense that this gesture had meant a lot to him, and he’d even had t-shirts made with the same design on them. The signed card Johannes gave us, originally designed and drawn for him by Sarah McIntyre.

The sign outside Majorstuen Kafe reads, ‘En annerledes kafé’, which translated means, ‘An extraordinary café’. And it certainly is. Here, the trimmings and garnishes are found, not on the plate, but in the quirky collectables, the vintage vibes and the warm, inviting atmosphere.

Oh, and did I mention the waffles?

Majorstuen Cafe has more details on its Facebook Page.

Skudeneshavn is on the Southern tip of the Island of Karmoy, county of Rogaland.

The closest main cities to Skudeneshavn to travel from are Haugesund and Stavanger.

Not all of our adventures in Norway have been so sedentary. You might like to read about us following the footsteps of the Viking kings in Avaldsnes, conquering Kjeragbolten or climbing Preikestolen (featured in the Mission Impossible film starring Tom Cruise).

For more things to do in Skudeneshavn click here.

We’d love to hear from you about your experiences in Norway. Have you been here?

Pin and Save for later 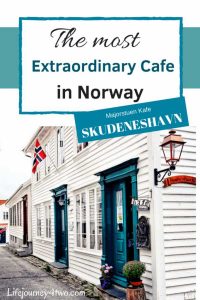 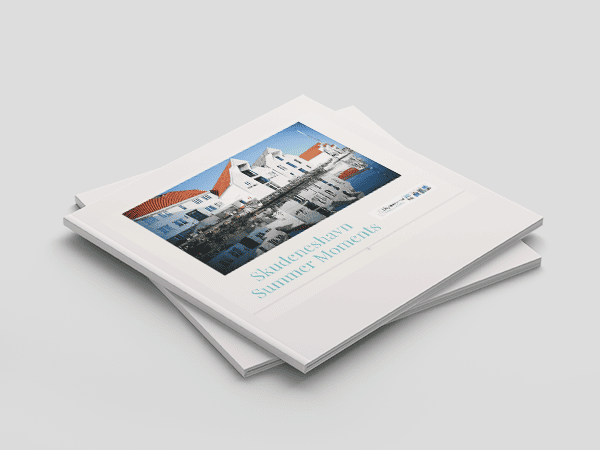 Shelley graduated with a Law Degree and a Post-Grad in Education. Before setting off on her travel adventure she was a passionate teacher. Now, Shelley travels the world cherishing every opportunity to inspire and motivate others through Lifejourney4two's travel writing and photography.

This site uses Akismet to reduce spam. Learn how your comment data is processed. 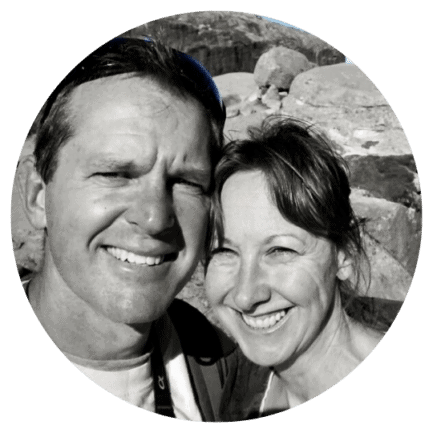 Click here to Browse our Photography Galleries from which you can choose gifts such as jigsaws, mugs, coasters, placemats, bags or prints and canvasses. 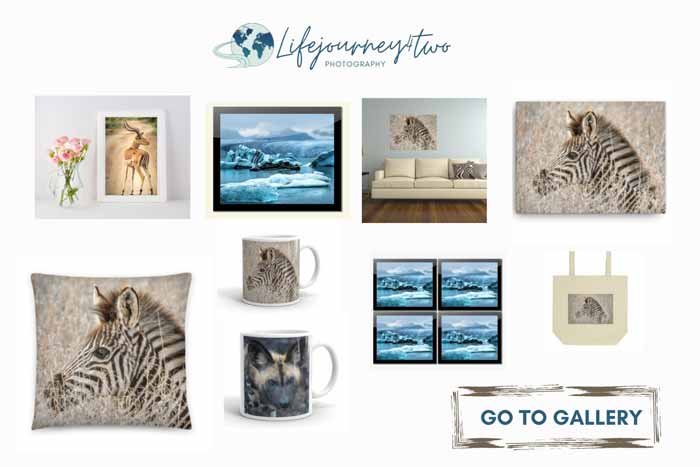 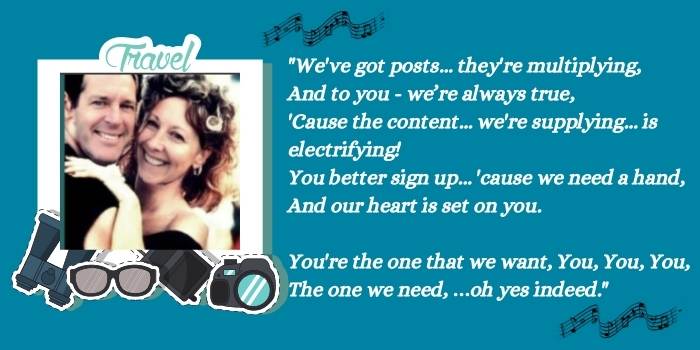