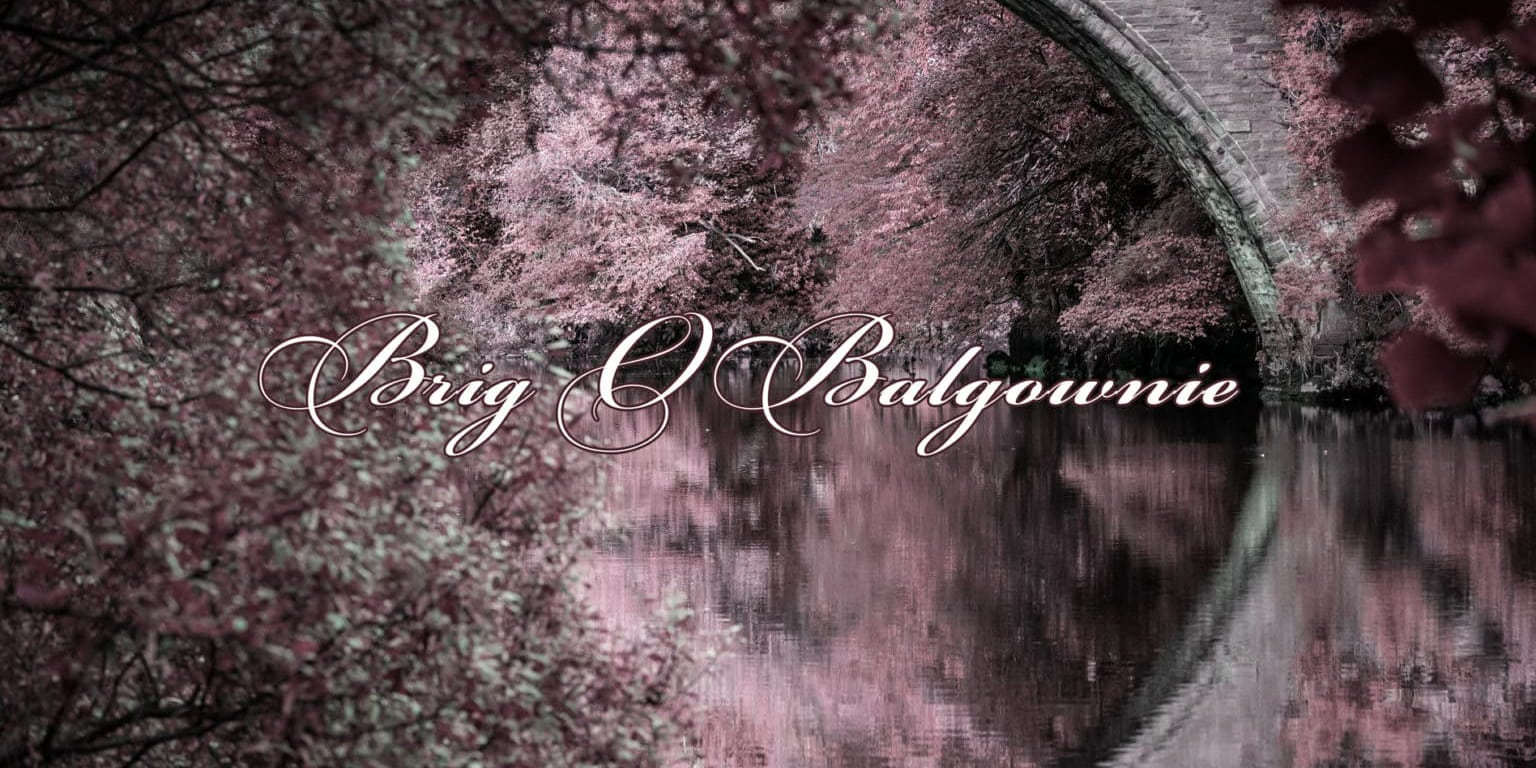 Some posts on this site contain affiliate links meaning if you book or buy something through one of these links, we may earn a small commission. Read our Disclosure Policy here.

Leafy trees drip over this ancient arch and woodland banks line the slow-flowing River Don below. No longer open to traffic, the bridge beckons you, its Victorian-style lamp posts lamenting times gone by as you take in the stunning views along the river.

Located in the old historic part of Aberdeen, the Balgownie Bridge is a surprise laying in wait for those who venture to find it. It’s not visible from the main thoroughfares in Aberdeen so you will need to search it out.

There are a couple of pathways that lead you to it and it’s a gem that shouldn’t be missed if you are in the area. This was one of our favourite places to visit in Aberdeen.

Back in the 13th century the Brig O Balgownie, formally known as the Bridge of Don, was the main bridge connecting Aberdeen to the north over the River Don. Therefore it was important as a trade route to the north and for the movement of armies along the east coast.

In 1831 the adjacent bridge, 500 metres further east, the new Bridge of Don, was built. Today the ancient Balgownie Bridge is listed as a Scheduled Ancient Monument.

Richard Cementarius, the King’s Master Mason and Alderman of Aberdeen in 1272, is believed to have been engaged in building the bridge. Drum Castle’s Tower House, the oldest in Scotland, is also considered to be one of his designs.

The plaque on the bridge of Balgownie reads:

This bridge, one of the oldest in Britain, was completed about 1320 supposedly at the behest of King Robert the Bruce. It has a gothic shaped arch with a clear span of some 12 metres and is built of a mixture of sandstone and granite. In 1605 it was almost totally rebuilt by the town council and at the same time a fund was established for its maintenance in perpetuity by Sir Alexander Hay of Whytburgh and Newton.

The Bridge is a scheduled ancient monument.

So, the Bridge was supposedly built at the request of Robert the Bruce. This fact alone makes the Brig O Balgownie a little bit more special. This is because Robert the Bruce is somewhat of a National Hero in Scotland.

His name and statues of him pop up all over the place. In case your history is like mine and a little lacking with regards to who’s who in Scottish days of old, here’s a condensed lowdown on Robert the Bruce.

Who was Robert The Bruce?

However, the connection to Robert the Bruce isn’t the only claim that Brig O Balgownie has when it comes to historical celebrities. The Balgownie Bridge features in the poem ‘Don Juan’, written by the well-known poet, Lord Byron (1788-1824).

Byron was born in England but spent much of his childhood being raised by his Scottish mother, in Aberdeen. The poem of Don Juan (which was still unfinished when Byron died), has 16,000 lines — yes quite the epic poem. Balgownie gets a mention in this verse:

“As ‘Auld Lang Syne’ brings Scotland, one and all,
Scotch plaids, Scotch snoods, the blue hills, and clear streams,
The Dee, the Don, Balgownie’s brig’s black wall,
All my boy feelings, all my gentler dreams
Of what I then dreamt, clothed in their own pall,
Like Banquo’s offspring; – floating past me seems
My childhood in this childishness of mine:
I care not – ’tis a glimpse of ‘Auld Lang Syne.’”

The Bridge of Balgownie is a charming piece of ancient history in the old part of Aberdeen. But its location gives it an extra appeal. It is surrounded by mature trees along the banks of the River Don and attracts a variety of wildlife.

A tree-lined path beside a river has to be one of nature’s best sedatives, and the Brig O Balgownie delivers in bucketloads. Many cultures have a name for getting outside and enjoying nature. The Nordic word for enjoying the great outdoors is friluftsliv and shinrin-yoku in Japan means forest-bathing. The area here is perfect for a refreshing spot of forest bathing.

You may spot seals and otters in and around the shady banks along with lots of water birds. We even saw a couple of deer grazing on the island between the Balgownie Bridge and the Bridge of Don.

The deep pool of water under the Brig O Balgownie is known as the Black Neuk. Neuk means a nook or corner in Scottish. For centuries locals have been jumping off the bridge into the black waters below. With Aberdeen being a university town, it is no surprise that university students often jump from the bridge for fun.

However, there is a sign on the bridge warning against jumping due to possible changes in the river’s depth.

The individuals involved here are professional jumpers, the Doveys. Divers inspect the jumping site and the depth of water and trained lifesavers watch from the banks during filming to ensure the safety of the jumpers.

Leading towards the bridge on the eastern side is the Cottown of Balgownie, a row of late 18th-century terraced industry worker’s cottages.

They reminded us of the chocolate-box cottages of the Cotswolds. Flowers festoon their compact front gardens adding to their picturesque appearance. It is, therefore, no wonder that the Brig O Balgownie cottages are Scottish Heritage listed buildings.

To find out more about this area and to read the stories and memories of locals from the 1920s onwards you can read this booklet.

The Brig of Balgownie is in the old part of Aberdeen in Aberdeenshire, in the northeast of Scotland. To expand the map, click the right-hand square to open and you will find a key on the left.

The paths along the River Don that lead to the Brig O Balgownie, are part of the Donmouth Local Nature Reserve. The Reserve starts at the mouth of the River on the shores of South and North Donmouth Beach.

You can click here for more trails in the Donmouth Nature Reserve.

There are several access points to the paths leading to the Brig O Balgownie.

The paths are shaded with trees and you follow the river between the Balgownie bridge and can keep going along to Donmouth Beach, where the landscape changes from woodland to seascape.

Seals swim in the estuary and the wide-open space of the ocean contrasts with the intimate paths by Balgownie.

It’s autumn in Aberdeen and golden leaves flutter around Scotland’s oldest medieval bridge, tumbling into the black neuk below. For over 500 years, Brig O Balgownie has watched the seasons pass.

Horse and carts no longer clatter across its cobblestones, and armies have no need to march across, defending Scotland’s shores.

Joggers, dog walkers, students and those of us who appreciate its beauty visit now. We snap selfies’ with our phones, and can see the people we talk to — no matter wherever they are in the world.

I wonder if it will still be here in another 500 years.

Who will be crossing its cobblestones then?

And what changes will the Brig O Balgownie be witness to?

This unpretentious Bridge is just one of many places to visit in Aberdeen, but I would say that it is one that takes you through a portal back to nature and back to a time when things were simpler.

You May Also Like to Read Our Scotland Travel Guide or:

These are some of the travel resources we use when planning our trip.