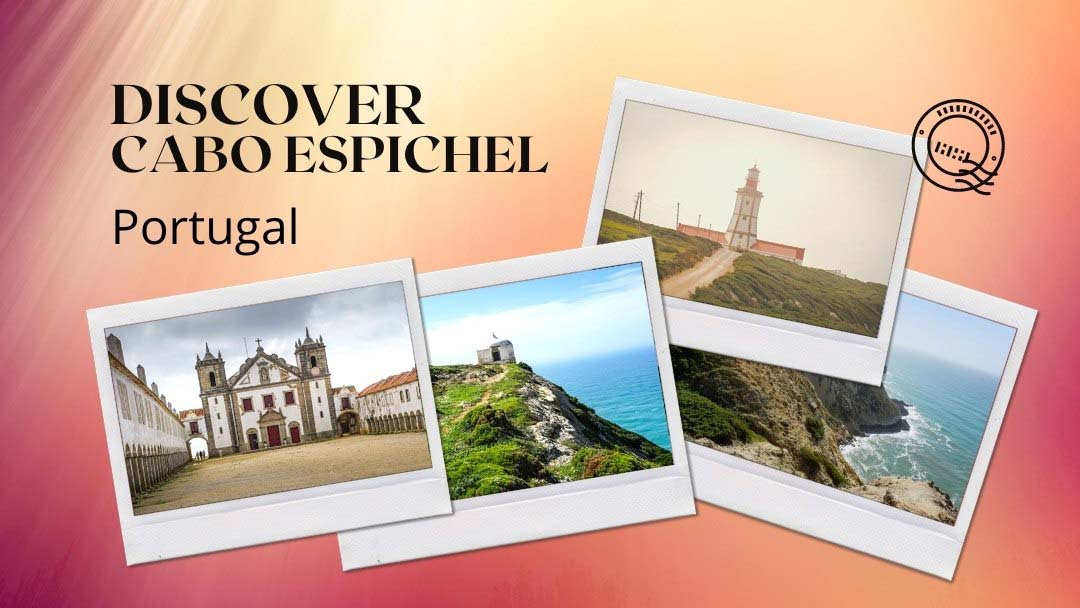 Cabo Espichel, and its wild beauty, sits on the tip of the Setubal Peninsula in the southwest corner of Portugal. This church, set in a wild landscape boasting rugged cliffs, pounding seas and gusting winds, has attracted both pilgrims and scientists over the centuries.

If you love the wildness of nature, then Cabo Espichel and its landscape will enthral you. You will also find out about the connection between the Virgin Mary and ancient dinosaur tracks.

Cabo Espichel is 40km south of Portugal’s capital city, Lisbon and a short 15km drive from the nearby coastal fishing town of Sesimbra.

Parking is not a problem as there is a huge area right by the church and within easy walking distance of other sights here.

The buildings here have an interesting history and of course, there is a spectacular surrounding landscape to explore. And surprisingly, there are also prehistoric dinosaur footprints to find.

MAP OF CABO ESPICHEL AND ATTRACTIONS

THINGS TO SEE AND DO AT CABO ESPICHEL

The Santuario de Nossa Senhora do Cabo Espichel is also known as the Sanctuary of Our Lady of Cape Espichel, or Nossa Senhora da Pedra Mua. It was built in the early 1700s and housed many religious pilgrims. The pilgrims were drawn to Cabo Espichel because of the reported visions of the Virgin Mary riding a giant mule along the rugged cliffs.

Due to the enormous number of pilgrims flooding to the church, long accommodation wings needed to be built on either side of the church.

Opposite the Santuario de Nossa Senhora do Cabo Espichel, you’ll find a small hexagonal building in similar colours. This is the Casa da Agua, and 2020 marked the 250th anniversary of its construction.

The Casa da Agua (water house), received water via an aqueduct from the town of Azóia, and vegetables were grown in the attached garden to feed the pilgrims visiting the Sanctuario.

Behind the church, on the precipice of the cliff, you will find the ‘Ermida da Memória’ chapel. This was built in the 15th century, and it marks the site where the image of ‘Our Lady’ (the Virgin Mary), is believed to have ‘appeared’.

But paleontologists have a different theory about the footprints on the side of the cliffs. They believe that they are the tracks of a dinosaur, rather than a giant mule.

A traditional azulejo (blue and white) tiled representation of the Virgin Mary’s vision, is found within this tiny Chapel on the cliff.

An easy fifteen minutes walk from the church will have you gazing up at the majestic 32 metres high, Cabo Espichel Lighthouse. A lone sentinel on this wild coast. The lighthouse began operating in 1790 and is still functional to this day. Of course, it has had few technological tweaks since its construction.

It is now automated, and as part of a scheme to promote the importance of Portugal’s lighthouses, it is open to the public on Wednesday afternoons.

Not only do you have religious relics, wild landscape and the Cabo Espichel lighthouse to explore, but there are also dinosaur tracks nearby.

On the Cabo Espichel cliffs, you’ll find what are believed to be marks embedded in the rocks made by dinosaurs.

There are two sets:

If you zoom in on the above map you can make out the dinosaur footprints. I have put a marker for where to look.

The Pedra da Mua tracks are located on the side of the cliffs below the Ermida da Memorial chapel and are difficult to see. The best viewpoint is from the opposite cliff but you’ll need binoculars to make them out.

It is believed that these footprints are from the Jurassic period, (about 145 to 200 million years ago). There are several different prints, but most are presumed to be those of the four-legged sauropod dinosaurs, the largest group of dinosaurs.

The Lagosteiros dinosaur footprints are easier to reach and are only a twenty-minute walk from the church. Follow the signs showing you where to go so you don’t miss the markings.

These footprints date back to the Cretaceous period, (about 65 to 145 million years ago) and are thought to be those of the two-legged theropod group of dinosaurs such as the tyrannosaurus rex.

You might also want to consider taking one of the many well-trodden walking paths in the area. Whether along the cliffs or inland, the landscapes are wonderful.

We hiked across quite a few of the paths during our quest to log the many Geocaches in the area. Haven’t heard of geocaching? It lets you discover the out-of-the-way places that you often don’t find on Google. If you’re interested then you can read more about it here.

Alojamento Espigas – guests love the continental breakfast and this accommodation has an 8.1 review rating.

Casal do Frade – Rated as exceptional, this eco-lodge is set in the Arrábida Nature Reserve. It has a salt-water pool, tennis court and holistic spa.

With camper parking at Cabo Espichel, this was a perfect stop on our motorhome road trip through Portugal. Being an Australian brought up in the country, Lars learnt at an early age to enjoy the freedom and beauty of nature. Leaving Australia at the age of 20, although he didn’t know it then, would be the start of a life filled with adventure. Join him here and see the world through his lens.