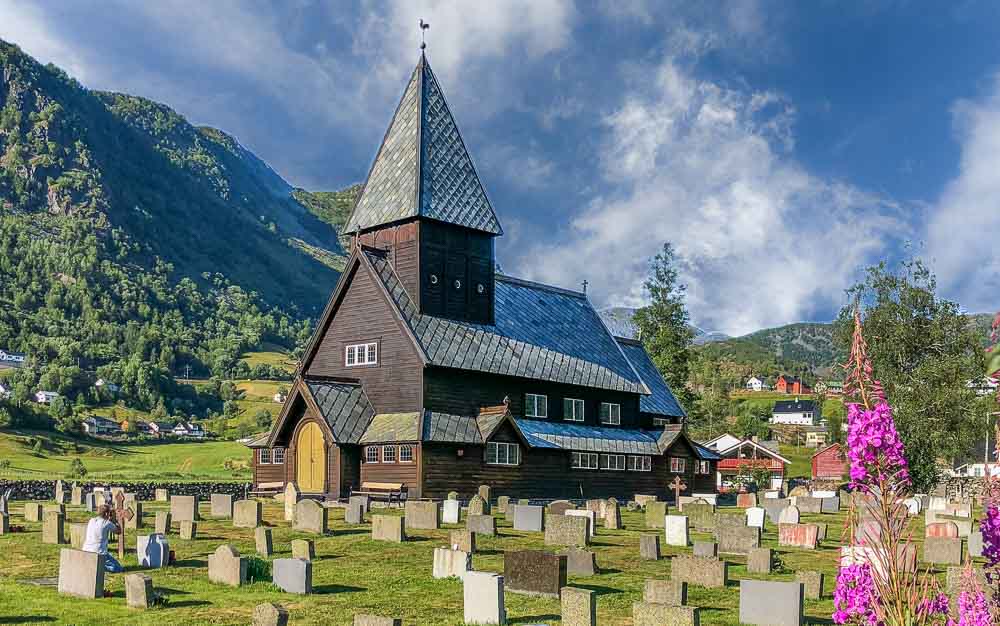 There’s no denying it, mother nature gave Norway more than its fair share of beauty. With its craggy snow-crested mountains thrusting from deep, emerald green fjords, the mystical Northern Lights that shimmer across a midnight sky and cascading waterfalls enshrined in mystery. Could there be more? Oh yes.

What is a Stave in Norway?

First things first, we need to clarify what is a stave in Norway. Designs for Norway’s stave churches differed but they all shared a common feature in that they were built with major uprights or ‘staves’.

These corner post staves then formed the framework of the central room from which the skeletal framework of wall planks was hung. These were then called ‘stave walls’. The curved parts of the building were taken from the naturally occurring ‘knees’ of a tree between the trunk and the roots.

Construction of Stave Churches in Norway

Stave churches Norway were built of a preserved old-growth pine that was left to stand vertically after cutting, to allow the sap or pine resin to be drawn upwards to the top of the timber and branch sockets. From here, the sap would fall prey to gravity and soak the timber as it travelled toward earth thus creating protection for the timber and importantly, resistance to rot. This helped greatly, as many of the earlier built Norway stave churches used a construction method using earthbound staves.

However, a later and more effective structural improvement was to sit these vertical staves on sills or foundations of stone. This technique was key to timber preservation (to prevent dampness and resultant rot) as attested by the remaining historical stave churches, all of which rest on such sills.

Another part of the successful preservation of timber is owed to the application of coats of tar to the timbers. Pine timber was placed in a kiln and under low heat conditions, the wood was reduced to charcoal with the black tar by-product. The tar has a distinctive and pleasing pine scent and was commonplace in all the stave churches we visited.

We spoke to a painter at Heddal stave church who said he re-applies the tar to the exterior of the church every couple of years and the job takes months to complete. The tar was manufactured, as much as possible, to the methods of old.

When were stave churches built in Norway?

Norwegian stave churches, architectural marvels of their day, were mostly built between the 12th and 14th centuries for the Roman-Catholic church. However, in 1536, the Evangelical Lutheran faith replaced Catholicism during a period known as the Protestant Reformation.

What happened to stave churches?

There were once thought to be over 1000 medieval Norway stave churches existing at one time. Today, however, there are but 28 beautiful stave churches remaining in Norway. The Norwegian Directorate for Cultural Heritage between the years of 2001 and 2015 undertook The Stave Church Preservation Programme in an effort to restore Norway’s architectural heritage. Skilled craftsmen were used to not only assess the structures but also to employ the original building methods and techniques, as much as possible, during the restoration process.

How many stave churches in Norway?

We made sure that during our Norwegian road trips we included these stave churches on our must-see list.

Here are the five that have dazzled us so far:

MAP: WHERE TO FIND THE BEST NORWAY STAVE CHURCHES

To use this map, expand it using the square symbol on the top right-hand side and then look to the key on the left-hand side. By clicking each location you will find the corresponding position on the map.

Many of the original Norway stave churches had survived up to the 19th century but a law was introduced stating that churches must be able to hold at least a third of the local population which resulted in new churches being built and the dismantling of stave churches.

In more recent times, since 1992, twenty-two stave churches have unnecessarily found their demise at the hands of arsonists.

Location: Odda municipality of Hordaland county, Norway within the village of Røldal

This church was an important pilgrimage site in Norway up until 1835. A crucifix inside the church, dating back to the 13th century, was said to ‘sweat’ each year and it was this sweat that held healing powers.

In the early 20th century the church underwent a major renovation and the outer walls are now protected with an outer wooden layer. To this day, Røldal Stave Church still operates as the parish church for Røldal.

Want to include this stave church in your own road trip? Grab some ideas from our Norway itinerary.

Year of Construction: Around 1180

This is one of the best-preserved stave churches in Norway and has been used as a template for the renovation of other stave churches.

It is characterised by its carved portals, the dragon’s head carvings that adorn the rooftops and the scale-like wooden shingles on the roof. The interior is far from plain, with many different designs and patterns on its wooden walls.

Close by the Borgund Stave Church is the only free-standing stave bell tower in Norway and is believed to have been built in the 13th century. In 1868, one of its two large bells was shifted into the ‘new’ Borgund Church.

Borgund stave church existed as the county parish up until 1854 and in 1877 was purchased by the National Trust of Norway to save it from demolition and hence proclaimed a museum.

Of interest is the nearby Kongsvegen or The Kings Road that passes a short distance behind the Borgund Stave Church. This hand-built paved road was completed in 1793. We hiked part of this historic route and you can read more here in our 10 of the Most Spectacular Hikes in Norway article.

Location: Vik Municipality of Vestland county in the village of Vikøyri

This triple-nave stave church proudly stands just outside the village of Vikøyri with panoramic views over Vikøyri and the Sognefjord.

From the outside, the roof is adorned with popular dragon head depictions.

Interestingly, if you view the church roof from the inside, it takes the shape of an inverted boat with its exposed ribs. Looking closely at the walls reveals runic inscriptions and symbols. Even the door bears the carver’s marks. It was common to bury the dead underneath the church floor but this practice ceased early in the 19th century partly due to the smell.

Location: Notodden Municipality within Telemark county in the village of Heddal

This mid-13th century stave church is impressive, boasting 3 turrets and over 50 roof surfaces and it rightly claims the title of the largest stave church in Norway.

Heddal stave church is still in use as the main parish church in Heddal. The church’s interior designs reflect legendary myths of Sigurd the Dragon Slayer seen in wall paintings and an altar dating back to the 17th century.

The four doorways are heavily carved with each facing one of the main directions on a compass. Men, women, clergy and processions used their own doorways in an effort to ward off evil spirits.

Location: Oslo at the Norwegian Museum of Cultural History

The Gol Stave Church was originally from Gol, Buskerud Municipality in Viken county, Norway. In 1885, this church was due for demolition but was instead gifted to the King of Norway who moved it from the mountains to Oslo and reconstructed it to resemble its original look.

The Gol stave church is now a museum located in the Norwegian Museum of Cultural History on Bygdøy, a peninsula on the west side of Oslo.

Taking pride in place on the hill within the museum grounds is the Gol stave church. At the church entrance, we met Annie, a local guide who was resplendent in national dress. In Norway, the ‘bunad’ is the name for the folk costume for both women and men and worn most commonly on Norway’s national day, 17th July or Constitution Day. Follow the link to our article where we share our experience of 17th July in Norway.

Typically a bunad can cost between 30,000 and 40,000 Nok (Norwegian Kroner) which averages out to USD$3,500 or GBP2,900. Yes, it’s an investment! This link takes to you a Norwegian site where you can see the different regional designs of bunad.

I digress, now back to the Gol. Annie, our guide, was really knowledgeable and shared the history of the church and stave churches in general. She walked us through the church pointing out under torchlight nearly invisible runes on the walls and staves. One of the memorable stories she told us was that the women always stood on the north side of the church in the event that the demons should get in. This way the women would be taken first!

Below is a map showing the remaining 28 stave churches in Norway and a list if you want to be familiar with the names.

Norway stave churches are dotted all around the country and the easiest and most time-effective option is to have your own vehicle.

This means you have control over when you need to get going and which direction you can head. If we need to hire a vehicle then we use Rentalcars.com to find the best car rental deals.

In all our travels we’ve not seen the likes of these architectural masterpieces anywhere. Norway stave churches surely represent quintessential ‘old Norway’ at its very best. And to think that these beautiful works of art were built not by master craftsmen, but by talented local tradesmen.

Have you visited any of the Norway stave churches? Did you have a favourite? We loved visiting the stave churches and we’d really like to hear what you thought of them. Feel free to drop a comment below.