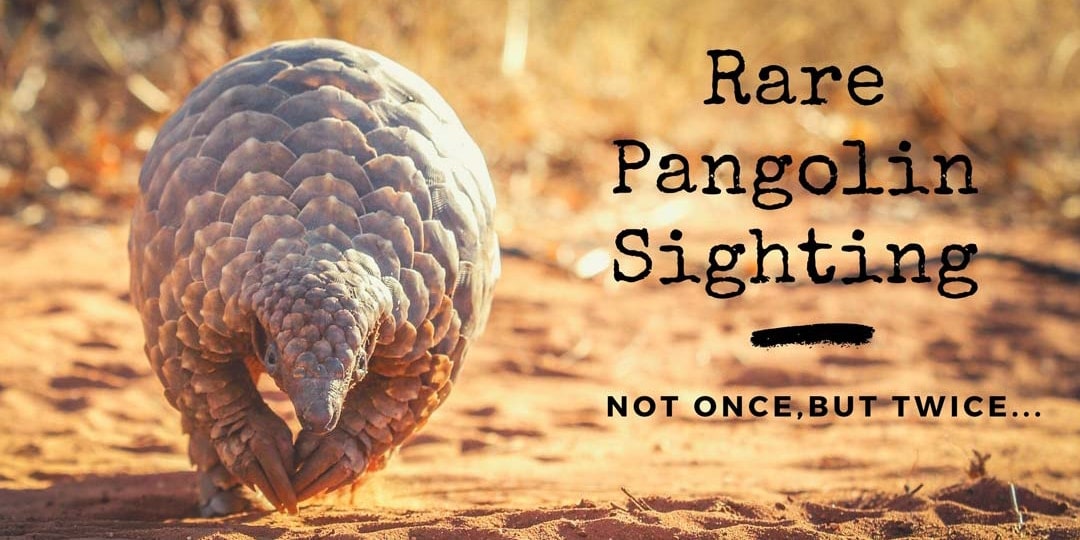 Branches snapped and dry brushwood crackled as we stared intently at the thicket, trying to get a glimpse of whatever it was interrupting the gentle hum of the African bush.

It’s a strange feeling when you look upon something that is so foreign to you. Your brain struggles to make sense of it. One hundred questions simultaneously flood your memory bank but come back with the same answer —

“Beats me, you’re on your own for this one.”

Which end was which?

Had we stumbled upon a new species left over from the dinosaur age?

It had a vague resemblance to the Anteater from the  ‘A-Z of Animals’, that the kids and I spent hours pouring over when they were little. But anteaters didn’t have scales as far as I could remember.

This looked like something out of Dr Who; a menacing giant slug-like creature that was now trundling towards us.

Guessing it was the head that was upfront, and the animal wasn’t prone to walking backwards, I searched to find a face amongst the mesmerising pattern of overlapping brown scales.

It was then that those two tiny eyes on the cutest elongated snout met mine… My heart melted.

Whatever it was, stopped in its tracks – obviously aware that it had an observer. Luckily, Lars had been studying the bush books back at camp. Each morning he’d have a quick look around at the impressions in the sand and determine which wild animals had visited us whilst we slept. He’d seen mention of the pangolin and now excitedly reported what was edging towards us.

Watch the story of our first rare pangolin sighting in this video.

We didn’t want to scare it, but Lars managed to get some shots and I captured a little video on my iPhone. Why I didn’t grab my proper camera to film it I don’t know. I was perhaps too caught up in the moment – still trying to get my head around this amazing creature in front of me. Trying to take it all in.

The light was fading and the distant roars of lions rumbled across the South Africa bush. We left the pangolin to continue on its way.

Many people we spoke to afterwards, who had lived in or near the greater Kruger area, had never seen a pangolin at all. And there we were, actually seeing one, having arrived in the South African bush just a few weeks earlier.

Certain wildlife sightings give you a lifetime of safari bragging rights and apparently a pangolin is pretty much the trump card. At the time, we hadn’t realised how rare and coveted our encounter had been. Nor had we realised how threatened these endearing animals were and how many suffer the cruellest of fates in the illegal trafficking trade.

Pangolins are the most trafficked mammal in the world, and having existed on this planet for more than 40 million years, their existence is now hanging by a thread.

However, pangolins are one of the least menacing animals you could find – unless you are an ant or a termite, in which case you are likely to meet your demise on the end of its very long, sticky tongue.

They are shy, solitary animals – only mating about once a year. The female pangolin then gives birth to one pangopup. For the first 2-4 weeks of its life, the pup remains in the burrow. Later, the mum carries it about on her tail. At 3 months the pangopup is independent but generally stays in the same area as its mother for about a year.

The pangolin’s scales, made of keratin, (the same material as our fingernails) act as defensive armour protecting them against predators. When startled or attacked, the pangolin curls itself into a ball making it difficult to be harmed. Unfortunately, this defence mechanism only works well against other animals – not against human poachers. It also doesn’t bode well for them when they’re caught in an electric fence as they curl up instead of escaping.

The name pangolin comes from the Malay word, ‘pengguling’ meaning ‘something that rolls up’. The fact that the pangolin is easy to catch (once found), combined with its low birth rate, means that the fight against illegal poaching and trafficking is vital if the species is to survive.

There are eight species of pangolin in the world, four in Asia and four in Africa. All are listed as endangered on the IUCN Red List, ranging from vulnerable to critically endangered with all of their population numbers trending downwards.

Their meat and scales are valuable commodities, particularly in Asian countries such as China and Vietnam. The meat of the pangolin is considered a delicacy among wealthy Asians and its consumption is viewed as a symbol of socioeconomic status.

Both pangolin foetuses and babies are used in soup and are also soaked in rice wine as a drink. The pangolin scales are used as ingredients in traditional Chinese medicine and are also used to create jewellery and amulets.

The medicinal and health claims of the meat and scales are numerous, but of course, just as with rhino horns, none are scientifically proven to afford any health benefits whatsoever.

According to an article in National Geographic, a record high of 128 tons of pangolin scales and meat were intercepted worldwide in 2019. An estimated 1900 pangolins are killed for every 1 tonne of scales – the situation is heartbreaking.

In South Africa, if you are caught smuggling pangolin you can face 10 years in prison. The following documentary film is about the four species of pangolin in Africa and how fragile their existence is now due to poaching and illegal trafficking for their flesh and scales.

It is well worth a watch to get a clear picture of this devastating situation and to learn how important pangolins are in controlling ants and termites within our ecosystems.

RARE PANGOLIN SIGHTING – NOT ONCE … BUT TWICE

After a couple of months of life in Klaserie Nature Reserve in Greater Kruger, we spent the next two months on a self-drive safari in Kruger National Park, amongst the amazing animals of Kruger.

One early afternoon, after a fruitless morning drive, we were heading back to camp in our 4×4 Bush Camper, when I spotted a weird looking shape ambling across the road ahead.

That weird shape just so happened to be our second pangolin rare sighting. Lars threw open the car door to get a better shot, but the poor little thing must have heard our approaching vehicle and it suddenly stopped in its tracks and curled into its defensive pose.

What was even stranger about this pangolin sighting was that it was 12.30 pm in the afternoon. Pangolins are generally nocturnal, so to spot this little gem in the middle of the day was even more of a surprise. With nature’s  ‘unpredictability’ working at its best, we were beholding our second rare sighting of a pangolin.

Still hardly believing our incredible luck, we drove back to camp. Neither of us talked much on our return, we were caught up in the magic – replaying the scene over and over – trying to capture each precious moment, embedding it for fear it would slip away too quickly.

“Did you have many sightings? ” Our camp neighbour shouted out as we began unrolling our shade awning.

Before, we could answer he continued to tell us about the pride of seven lions he and his wife had followed along the river. We listened patiently, with an undercurrent of excitement. The conversation turned back to our day.

‘We didn’t see much, only a pangolin…’

WHAT CAN YOU DO TO HELP THE PANGOLIN?

(We also donate 10% of our ETSY shop profits to WWF)

YOU MAY ALSO ENJOY READING: