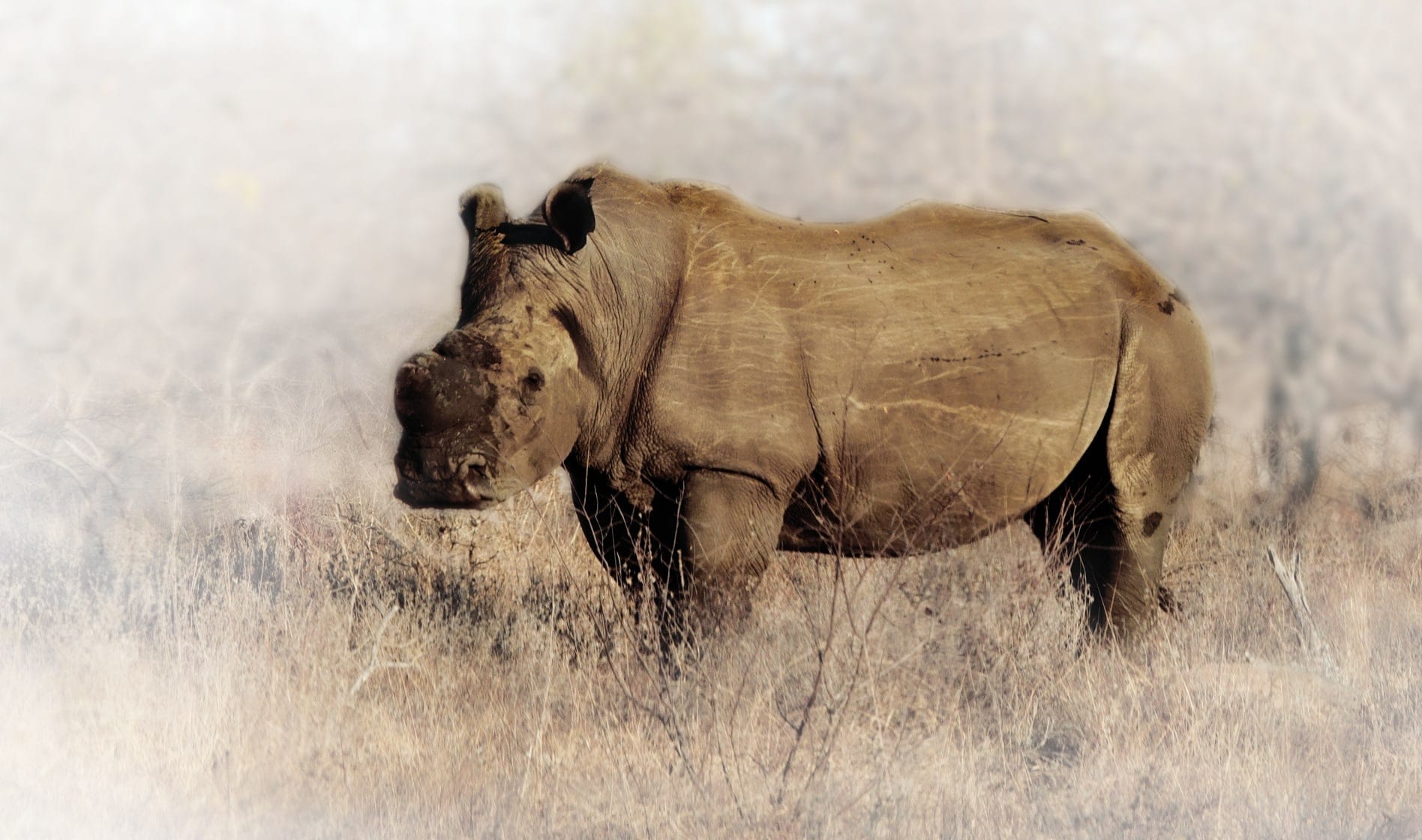 RHINO DEHORNING IN SOUTH AFRICA AND THE PATH TO SURVIVAL

Taking a chainsaw to a rhino doesn’t sound like it could be a good thing. And it isn’t the preferred action any game reserve management decides to take. For the preservation of the species, however, rhino dehorning is a strategy that is helping to decrease the number of rhinos poached and killed for their horns.

Rhino horn is a lucrative and much sought-after product in certain countries, making the poaching of one of these animals a risk worth taking. Illegal poachers have absolutely no qualms about taking the life of a rhino and axing the horn from its bleeding skull.

It is not easy to forget the sight of a slaughtered rhino.

It’s easy to decry the purposeful removal of a rhino’s most distinctive feature, but at the grassroots level, it’s about survival. Here in South Africa, living within this precious wildlife environment exposes you to some hard truths.

We had the opportunity to spend time with Colin Rowles, Warden of Klaserie Private Nature Reserve, part of Greater Kruger in South Africa, to gain a clearer insight into this challenging and often emotionally charged subject.

There are five species of rhino in the world with all either listed as critically endangered, near-threatened or vulnerable according to the IUCN Red List (International Union for Conservation of Nature’s Red List of Threatened Species).

The five species of rhino are:

There are only about 70 -80 Javan and Sumatran rhinos left in Asia, and both are critically endangered. The greater one-horned rhino is estimated to be around 3500 and it is listed as a vulnerable animal.

The African species, the black and white rhinos, are mainly found in southern Africa; in South Africa, Namibia, Zimbabwe and Kenya.

THE BLACK RHINO IN AFRICA

The black rhinos are critically endangered due to a combination of poachers killing them for their horns and habitat loss. Devastatingly, between 1970 and 1992, 96% of the black rhino population was lost because of poaching.

Numbers dropped to a worrying 2500, but today there are about 5500 left in the wild. Conservation efforts are having an effect, and the IUCN Red List reports that numbers are increasing, but it is a constant battle to ensure this species survives.

THE WHITE RHINO IN AFRICA

The white rhino is of least concern relative to the other four species of rhino and is listed as ‘near threatened by the IUCN.  But that does not mean this species is thriving. Poaching is still a huge threat to the white rhino and one of the two subspecies, the northern white rhino is now functionally extinct. Only two females remain and are protected in a conservancy in Kenya.

The other subspecies, the southern white rhino, was on the brink of extinction at the end of the 19th century, with only approximately 20–50 animals found in South Africa.

Conservation efforts, however, have managed to increase that number to the current estimate of about 20,000. Disappointingly though, the IUCN red list reports that numbers are decreasing.

DECLINING RHINO NUMBERS IN THE WILD:

READ MORE: Find out more about South Africa’s Rhino in this post: The Amazing Animals of Kruger National Park

A rhino’s magnificence isn’t just its powerful bulk, but also its impressive set of distinctive horns. Yet the rhino’s horn is really nothing special; it consists of keratin, the exact same material that makes up our own fingernails and toenails.

SO WHY ALL THE FUSS OVER RHINO HORN?

Some cultures, particularly those in Asia, such as China and Vietnam, prize rhino horn for its supposed medicinal properties, even though there is absolutely no scientifically proven benefit at all. Additionally, possessing rhino horn is seen as a status symbol in those countries due to the high cost of this rare commodity.

Rhino horn is worth more than gold on the black market. Therefore, to those who are poor and living hand to mouth in South Africa, poaching is a lucrative option. Often, poachers are so desperate, that they risk the potential consequences if caught.

Without the ludicrous demand for rhino horn, as well as its ridiculously high selling price, these behemoths of the bush would remain untouched.

You may also be interested in reading about the plight of the endangered pangolin which we encountered twice in South Africa — Click on this link: Rare Pangolin Sighting – Not Once, but Twice.

Rhino poaching has a see-saw effect. As demand for rhino horns increases, poaching increases, and the rhino population dwindles. This forces the price ever higher and increases the likelihood of these iconic African animals being poached.

Poachers have no care for the rhino itself, only the rhino horn. Killing the animal is the quickest and most effective way to achieve their goal. A gruesome and unnecessary death of the rhinoceros.

You may wonder how poachers find a rhino in the bush and are able to get close enough to kill it. Although rhinos have an acute level of hearing, they are creatures of habit and territorial. Rhinos follow the same paths in the same areas, making it relatively easy for poachers to track them and lay in wait.

Poachers also know, that if a mother is with her calf, the calf can be shot and the mother will choose to stay with her young even though it is dead rather than flee to save her own life. This strong maternal instinct makes her an easy target.

Rhino killings escalated to a new high in Klaserie Nature Reserve in 2018. On average, two rhinos per month were being slaughtered. With those kinds of numbers, it was estimated that within 3 to 5 years, the rhino population would be non-existent.

Desperate measures were needed to address this ongoing threat from poaching.

In 2019, after much planning with both government and private consortiums, Klaserie Private Nature Reserve was issued permits to undertake the unprecedented and ground-breaking move to counter poaching with a dehorning rhino programme.

It was to be the first and largest mass rhino dehorning event within an open system in South Africa.

Specialised teams took to the air and on foot to track and dehorn 78 rhinos over 10 days. It was a well-coordinated and precisely timed procedure.

Darting the animal from the air, ground teams then moved in and removed the rhino horn with a chainsaw. Veterinarians are always part of the team and instruct on the safe removal of the rhino horn. The removed horns are then taken off-site to a secure storage facility.

WAS THE RHINO DEHORNING PROJECT THE RIGHT DECISION?

Since the rhino dehorning project began in 2019, Klaserie Private Nature Reserve hasn’t lost any rhinos due to poachers. So yes, it’s definitely one of the great success stories of Klaserie Nature Reserve and a great win for the rhinos.

With a rhino’s horn growing about 50mm each year, the dehorning process needs to be repeated every eighteen months or so. A major drawback, therefore, is the cost of the project.

The adjoining Kruger National Park management has also dehorned some of its rhino population. But Kruger faces greater challenges due to the huge park area (nearly 20,000 square kilometres) and its massive operational costs. Kruger’s approach has been to only dehorn-selected female rhinos due to budget restrictions.

THE COST OF RHINO DEHORNING PROJECTS

The cost involved with dehorning one rhino ranges from approximately US $600 – $1000.

To dehorn all the rhinos in Kruger National Park, a one-off project, would cost around US$7 million. Therefore this prevention method isn’t feasible, given the regularity of having to repeat the dehorning procedure every 12 – 18 months.

The number of rhinos in Kruger National Park:

In the main, the rhino dehorning project in South Africa has led to a drop in poaching. However, there are exceptions to the rule with some poachers still killing dehorned rhinos.

Why would poachers kill a dehorned rhino?

DOES A RHINO NEED ITS HORN?

You may wonder if the horn removal somehow alters the behaviour of a rhino?

Observation of interactions between dehorned rhinos and those with horns has shown no difference in their behaviour or aggressiveness.

There has also been concern that female rhinos would not be able to defend their calf and the survival rate would decrease. However, a study by the Lowveld Rhino Trust found no evidence of adverse population growth in dehorned rhinos.

In South Africa, the selling and trade of rhino horn on local markets is legal, however, it remains illegal to trade on international markets.

One proposed solution is to legalise the international trade of rhino horn thus making it a legitimate commodity available to all on a common market. As a result, rhino farming would become a viable option and with this increase in supply, the price of rhino horn would cease to be a lucrative product with the knock-on effect being a decrease in poaching.

RHINO DEHORNING — A FUTURE IN THE BALANCE

Rhino dehorning has been shown to successfully deter poaching. The operation itself, however, remains exorbitantly expensive with reliance on private funding and donations.

The fate of the rhino remains in the balance, but with sensible, informed decisions and cooperative efforts in its ongoing conservation, this majestic animal will hopefully continue to roam the South African bush for the enjoyment of future generations.

I know for a fact that we would rather enjoy seeing a dehorned rhino than no rhino at all.

Are you for or against the dehorning of rhinos?

Have you had any great rhino encounters?

YOU MAY ALSO ENJOY READING …