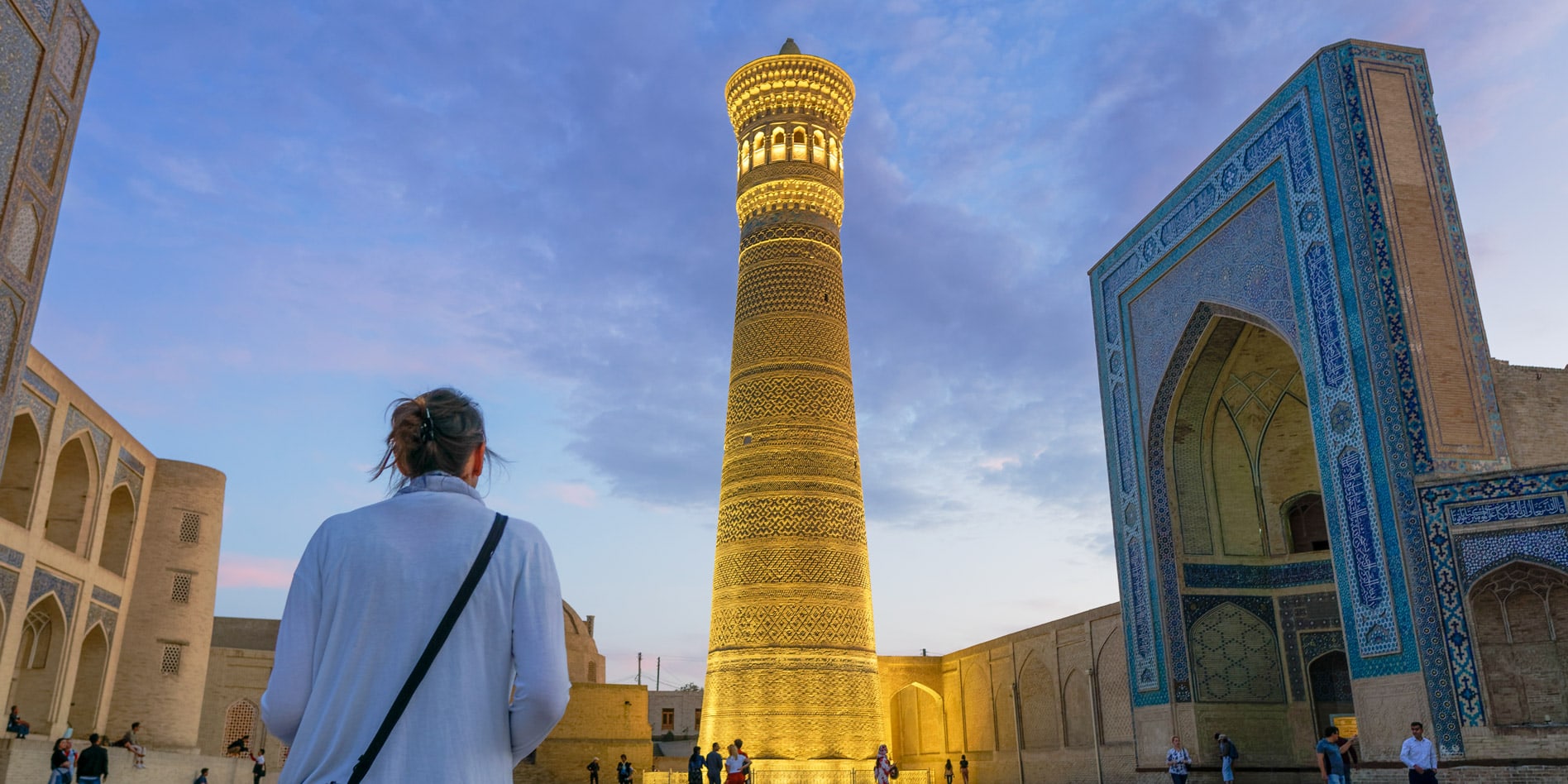 Home » Destinations » Best Things to do in Bukhara, Uzbekistan

THINGS TO DO IN BUKHARA, UZBEKISTAN

Each Uzbekistan city seems to have its own particular charm and vibe. Bukhara’s historic centre, UNESCO listed in 1993, is no different. This old city, lying in the heart of Central Asia on the ancient Silk Road route, seamlessly intertwines its historic past with the conveniences of the modern day. Bukhara’s vibe is relaxed and welcoming and with over 140 ancient monuments dating back to the 6th century B.C., there are plenty of great things to do in Bukhara.

MAP: PLACES TO VISIT IN BUKHARA

TOP THINGS TO DO IN BUKHARA

Bukhara’s old city’s pulse seems strongest at Lyabi Khause, (or Lyabi-Hauz), a hauz or pond, which was once used for water storage. Now, however, few ponds remain in Bukhara.

This particular one, with its palm tree-fringed perimeter, provides a popular meeting place for both locals and travellers alike.

Quiet by day, Lyabi Khause takes on a vibrant atmosphere by night. The sounds of an Uzbek musician seem to infuse the waiters with haste. They speedily deliver food and drink to the tapchans, the traditional raised eating platforms, where sitting cross-legged is the order of the day. For those whose legs aren’t happy to criss-cross, there are standard tables and chairs available too.

Talk a walk around Lyabi Khause and you’ll find a huge mulberry tree planted way back in the year 1477. Whether you decide to visit Lyabi Khause by day or night, there are many attractions close by to whet your appetite.

Shadowing the park is the eminent Madrasah Nadir Devon Begi. Its mosaics, on the front building, show distinctive colourful tigers and antelopes.

In many of the madrasahs we visited, the internal courtyard contained small handicraft shops. In this madrassah, what caught our attention was a rhythmical hammering noise in the courtyard. We followed the noise and came across a few artisans with hammers and chisels creating delicate designs in metals.

From the outside, the Kukeldash Madrasah, which can be found opposite Lyabi Khause, does not have the colourful artwork facade of the Madrasah Nadir Devon Begi, but don’t let that lead you to think it isn’t worth a visit.

A small unobtrusive sign on the outside of the madrassah, Anor – Suzani Shopping Centre, indicated that a business selling handicrafts lay within. Entering, we saw that the walls and floors were filled with tapestries. But not just any tapestries, but special Suzani or needle embroidered tapestries.

The owner, Zaynab Muradova, proudly showed us the differences between the Persian Suzani and other different types of embroidery.

Zayna explained how the stories of life were stitched into the patterns and that depicting the popular pomegranate was a sign of good luck. Zaynab is also a teacher of Suzani embroidery at the local university and is also planning to offer embroidery courses for tourists.

We could not enter the lodging house at the time of our visit as the area was fenced off and nearby trees prevented a good photo. The best we could do was a distance shot taken from Lyabi Khause. The front façade has some amazing detail.

Inside the park between Lyabi Khause and Madrasah Nadir Devon Begi, is an interesting statue of a comical-looking man gesturing with his hands on a somewhat small donkey.

Who is this man?

Well, it’s Hodja Nasruddin, an ancient philosopher known along the ancient Silk Road for his wisdom and wit.

While we were watching, a constant stream of people not only took photos with Hodja but also rubbed the statue for good luck. It is obviously a popular place to visit in Bukhara. Hodja was probably laughing to himself at this thought, but regardless, he was certainly getting plenty of attention from both locals and visitors alike.

On a side note: whilst at the statue, we spied what was an odd sight amongst these ancient buildings — a bright red hop-on / hop-off double-decker bus parked up and splashed with advertising for tours of Bukhara.

Looks like Bukhara is taking its tourism to the next level.

4. VISIT CHOR MINOR AND NEARBY MARKET

Within easy walking distance of Lyabi Khause, you’ll arrive at the cute 19th-century four blue-domed towers madrasah. Entry to Chor Minor is free and once you enter, you’ll find a single vendor squeezed into the entrance selling some traditional handicrafts.

Another thing to do in Bukhara, while near Chor Minor, and what caught our interest here, was the market opposite. Here, an array of old war memorabilia including uniforms and medals were on sale. We hadn’t seen the likes of this before in Uzbekistan. Imagine the stories, if those medals could talk.

If you are interested in photography, old cameras or prints of the old city, then the Bukhara Photo Gallery is another place to visit in Bukhara. This private gallery has paintings and prints on sale depicting typical Uzbek life.

If you’re in the old city of Bukhara then you can’t help but see the 12th-century Kalon Minaret. At 45m in height, it dominates the skyline.

Genghis Khan was so impressed with this structure, that he commanded that it remain standing. Up until the early 20th century, those caught breaking the law were marched to the top of the minaret and pushed over — sealing their fate.

As you can probably guess, sunset photos featuring Kalon Minaret are something well worth considering.

You don’t realise how impressive this 16th-century structure is until you walk into its courtyard. This mosque has a staggering 288 domes resting on 208 pillars within its galleries which encircle the courtyard.

The courtyard contains a lone mulberry tree which shades some seating and gives respite from the sun.

Note: The mosque closes just prior to sunset.

Opposite the entrance to Kalyan Mosque, is the recognisable Miri-Arab Madrasah, with its two large blue domes and spectacular tiled mosaics. This madrasah is still being used, providing education to future imams and religious leaders.

Close to the eastern entrance to the Samoniylar Istirohat bog’i park are two 16th-century madrasahs facing each other. Both the Abdulloxon madrasah and Modarixon madrasah have impressive blue-tiled mosaics and beautifully inscribed portals.

By chance, we were able to take a peek into the Modarixon madrasah courtyard which seemed to be quite neglected and at a guess unused. But this may be because this madrasah is away from the usual tourist route, and has yet to attract much attention.

Regardless, it was again great to see this wonderful workmanship still standing the test of time.

The Samanid small 9th-century mausoleum is special because it was built at a time when Islam forbade erecting any post-mortem monuments.

This family crypt is devoid of any of the intricately coloured mosaics seen in buildings in later centuries. Instead, symmetrically, patterned mud bricks give the building its own uniqueness.

9. BE AMAZED AT BOLO HAOUZ MOSQUE

Setting itself apart from other mosques, the 18th-century Bolo Haouz Mosque rises above the ground on twenty beautifully coloured and sculptured wooden columns. This is perfectly complemented by the exquisite patterns displayed on the ceiling.

Dating back to the 4th century, this huge earthen walled citadel, now called the Ark,  acted as a residence for the ruling Khans.

Access to the citadel is via a long uphill passageway, passing through a massive portal. The walls tower above the surrounding flatlands to a height of 20m. The inside of the Ark boasts a throne room, music pavilion, jewellers, stables, stores, jail and other rooms, which can all be viewed once inside the walls.

In the park opposite the entrance to The Ark, you can find a 20th-century modern observation tower with its own restaurant. It has one of the highest vantage points across Bukhara.

Close by the observatory is this striking memorial to Imam Al-Bukhari, who lived in the 1st century as one of the most revered Imams in Islam. He collected some of the most authentic sayings of the Prophet Mohammed which amount to thousands. Inside this complex lies his tomb and a museum.

Just walking through the streets of the old town is interesting in itself. Seemingly forgotten and neglected madrasahs and mosques dot the streets within easy walking distance of each other. The buildings are generally chained shut but you can often spy through small openings to see the unkept inner courtyards.

Local markets spring up in most of the free spaces in Bukhara, whether on the pavements or back streets. As we said before, the locals are not pushy to make a sale and it’s this friendliness that made us want to take a look without the pressure to buy.

This small dilapidated dwelling had a hand-painted sign, House Museum XIXth Century, on the outside of its courtyard. Looking in from the entrance, the yard was filled with random collections of local bric-a-brac with no theme of any sort.

The owner claimed there were great views of the old city, but this was not the case. We reluctantly parted with 20,000 SOM, even though no prices were on display, on the insistence of the owner.

Our recommendation would be to avoid this place.

WHERE TO EAT IN BUKHARA

Look for Lyabi Khause, an old water storage pond in the old town, where you’ll find a very popular restaurant and beside it a cafe. Nestled amongst the madrasahs, it is a great open place to relax and you’ll also be treated to some local nighttime music whilst you tuck into the great food on offer.

WHERE TO STAY IN BUKHARA

We stayed at the Amir-Yaxyo Hotel for our time in Bukhara. It was only a few hundred metres from Lyabi Khause,  a great location. We can also vouch for the fantastic breakfast and fast wifi.

For more options – check out the Bukhara accommodation deals available on Booking.com

THINGS TO DO IN BUKHARA… That’s a Wrap

We thoroughly enjoyed all these great things to do in Bukhara. The old town is filled with a variety of grand monuments and buildings. You also have the choice to just wander the streets and investigate all the interesting nooks and crannies.

If you’ve visited or you do so in the future,  let us know your favourite things to do in Bukhara by adding a comment in the box below.

This post may contain affiliate links. This means that we may earn a small commission from purchases you make through our links, at no extra cost to you. Thank you for supporting us. For more info, please read our Disclosure Policy.

YOU MAY ALSO LIKE TO READ THESE UZBEKISTAN ARTICLES: