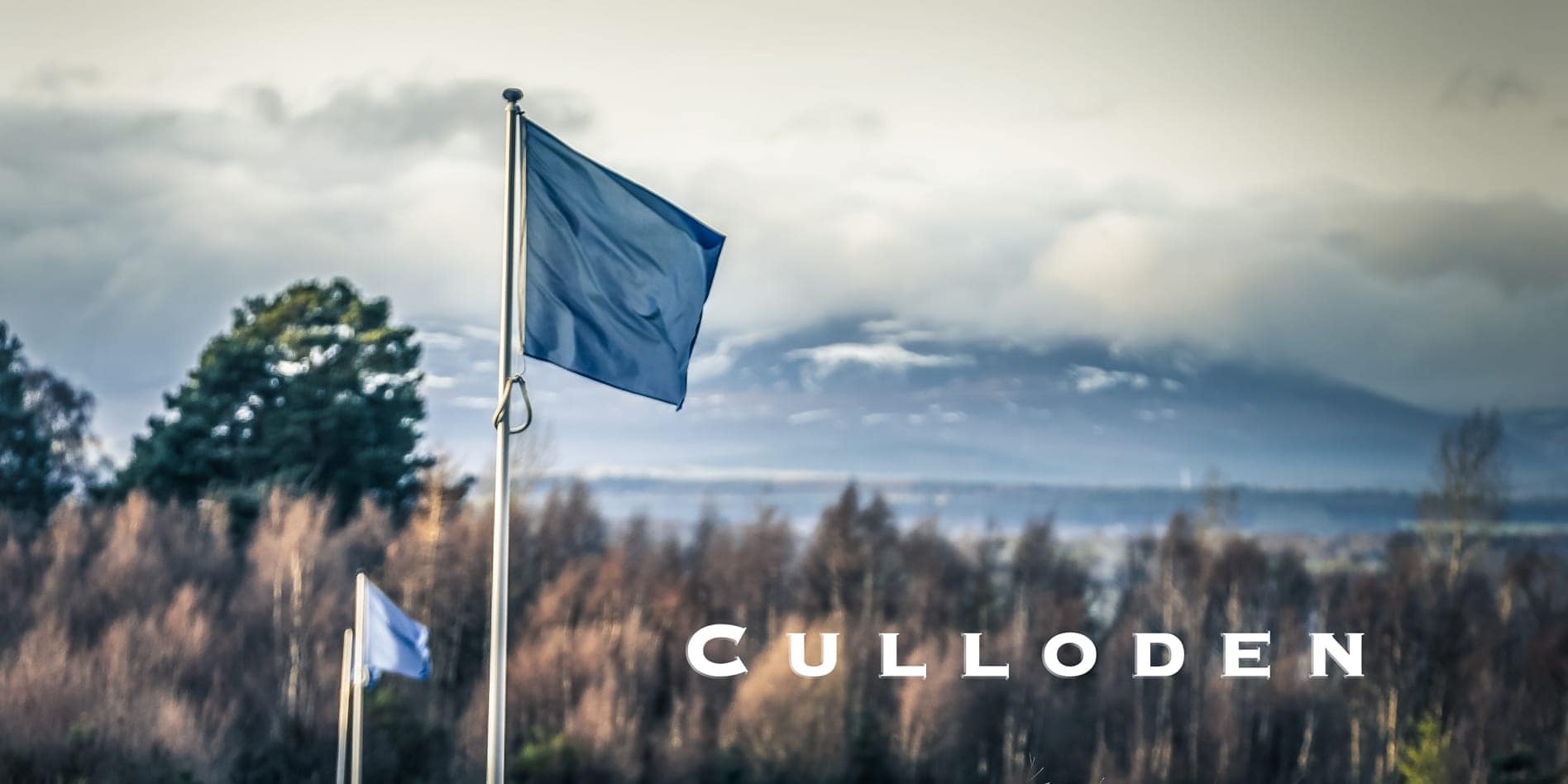 Home » Destinations » A Visit to Culloden Battlefield by an Outlander Fan

A Visit to Culloden Battlefield … by an Outlander Fan

“When the day shall come that we do part,” he said softly, and turned to look at me, “if my last words are not ‘I love you’ — ye’ll ken it was because I didna have time.”
― Diana Gabaldon, The Outlander Series

The fictional character of Jamie Fraser, in the hit series Outlander, may have survived the Battle of Culloden, to tell Claire once again, that he loved her. But on that fateful day, 16th April 1756, thousands of Jacobites ‘didna have time’ to say their goodbyes.

Around 1,500 men lost their lives on the Culloden battlefield. And most of those were from one side, the Jacobite Army. In the aftermath of the battle, the British Government troops hunted down and massacred many more rebels and Jacobite sympathisers.

Today, Culloden Moor serves as a solemn reminder of that day’s carnage. The final defeat of the 1745 Jacobite uprising. A moment in history that would forever change the Scottish Highland culture.

On a visit to Culloden, it’s difficult to ignore the pervading sense of sorrow draped over the countryside.

The Visitor Centre sets the scene, an immersive experience detailing both sides of the story. But the battlefield, with blood and battered bones long since disbanded in its soils, whispers its own tale. The wind-swept grasses, bolstered by buried bodies, scatter unsung ballads and echo war cries across the bleak landscape of Culloden.

A Visit to Culloden

Culloden battlefield attracts over 300,000 visitors each year. Numbers increased dramatically after the Outlander books by Diana Gabaldon were made into the TV series, Outlander.

Outlander, if you aren’t already aware, is a story about Claire Randall, a World War Two nurse who travels back in time from 1945 to 18th-century Scotland, where she becomes embroiled with young clansman, Jamie Fraser. The Jacobite cause, and the ensuing Culloden Battle, played a large part in the Outlander story.

Culloden battlefield and Visitor centre are in the northeast corner of Drumossie Moor, about 5 miles (10km) east of Inverness, off the A9/B9006.

The Culloden Visitor Centre has a combination of immersive exhibits, which tell the history of the two opposing sides, the Jacobites and the Government Army. Opposite walls, which wind through the building, portray a timeline of each side’s story.

Interestingly, each of the walls has a particular wooden panelling design. The Jacobite wall starts organised and turns chaotic whilst the British Government wall starts with muddled panelling and ends in neat formation. This is symbolic; things fell apart for the Jacobites and fell into place for the Government forces.

Along with information boards, the Visitor Centre has artifacts and other exhibits which bring the Culloden tale to life. Standing in the centre of the immersive 360-degree cinema allows you to absorb the emotion of the two sides charging into battle. Further along, an immersive walkway echoes with the mutterings of the two armies preparing for battle.

You can buy all sorts of mementos and Highland gifts from the Visitor Centre shop, which includes: Culloden Whisky, Harris Tweed Handbags, and Hairy Coos. You can even buy jewellery made with Culloden heather flowers and an Outlander-inspired amber dragonfly necklace.

One long wall, along the outside of the Visitor Centre, leads towards the battlefield and has stones that protrude from it. This is not a random design, each protruding stone represents a life lost in the Battle of Culloden.

Note: The battlefield is open every day (free entrance)

You need tickets for the Visitor Centre. (£11.00 – or members of National Trust enter for free)

Photography: You can take as many photos as you like outside, but photography is not allowed inside the visitor centre.

Scotland’s history is convoluted, complicated and confusing, and this period of its history is no less so; rife with power struggles, religious battles and international conflicts.

Here is a brief and simplified version of events and information to help you understand the lead-up to the Battle of Culloden:

The Battle of Culloden

On the 16th of April 1746, the Jacobite rising came to a horrific end at the Battle of Culloden. Between 1,500 to 1,600 men were killed, in less than an hour. The battle lines and details of the attack are marked on the battlefield at Culloden and the Visitor Centre provides immersive films and accounts of the battle.

Not only were the Jacobite troops exhausted, but the wide-open moorland of Culloden wasn’t at all suited to the highland charge. Before the cry to attack was given on the Jacobite side, canon fire was already decimating the Jacobite line. When at last the call to arms was given, the Jacobites were left with little choice other than to charge into the waiting bayonets, musket shots and cannonballs raining down on them.

The bloody battle ended soon after it had begun. Piles of dismembered bodies littered Culloden Moor. This was the last pitched battle to be held on British soil.

Stepping out onto the battlefield from the visitor centre, you’ll find red flags which mark the battle line of the Government army. 9000 Government troops gathered here, for a battle that was almost won before it even began.

At the opposite end of the field, blue flags blow in the wind, marking the battle line where the 5000 Jacobites prepared for the fight. They fought for honour, for their clan, for Scotland and for their lives.

To this day, between 1200 and 1600 bodies are buried in mass graves under the turf of Culloden. Stone headstones, added later, in 1881, stand as reminders of the clans and regiments who fought and died here. A Memorial Cairn was also built as a tribute to the various clans and regiments that were defeated on that harrowing day.

Entering the battlefield, on your right you’ll find the 18th-century Leanach Cottage. It was used as a field hospital by the English after the battle and was lived in until 1912, before being restored. The thatch roof is made of heather grown on the battlefield, and the walls with stones and turf. Leanach Cottage was the original Culloden Visitor Centre.

The aftermath of the battle and its impact on Scotland makes Culloden Battlefield one of the most poignant places in the Highlands.

The Aftermath of the Battle of Culloden

When the fateful Battle of Culloden came to an end, many of the wounded Jacobites were clubbed to death or shot. The Duke of Cumberland, known later as ‘The Butcher,’ ordered all rebel Jacobites and those supporting them, to be hunted down and killed.

Some of the remaining Jacobite Army gathered at Ruthven Barracks to continue the fight, but word came from Bonnie Prince Charlie, ‘Everyman for himself‘. So, with Prince Charlie turning his back on his supporters, the Jacobite rebels were forced to disband and became fugitives.

The Pacification of the Highlanders ensued, and the actions of the army, led by Cumberland, are said to have been the worst atrocities in the history of the British Army. The wearing of highland dress, clanship, the bearing of arms, and speaking Gaelic were all outlawed in the Act of Proscription in 1746.

Meanwhile, Bonnie Prince Charlie remained hidden until Flora Macdonald famously helped him escape, dressed as her maid to the Isle of Skye. The prince then found passage to France. He died in Rome, in 1788.

Truth be told, I had never heard of Culloden until I watched the TV series Outlander. The show touches on the devastating loss of life that occurred at Culloden. When we moved to Aberdeen to live for a year, (our Africa travels on hold due to Covid), I really wanted to visit the site that played such a huge part in Scotland’s history.

As I stood on the blue flag-marked battle line of the Jacobites, my heart ached. With damp eyes, I gazed across the moor. The sun was falling towards the horizon, reflecting off the golden shards of grass bending gently in the wind. The silence deafening with the screams of the fallen.

No longer a fictional battle with the handsome Jamie Fraser heading up the Fraser Clan, but a real-life event and the slaughter of over a thousand men. The Fraser Clan stone, visited by so many Outlander fans here, doesn’t mark the death of a fictional Clan Fraser, but real lives. Real men. Real Frasers, Maclachlans, McDonnells, McDonalds, Chisholms, MacLeods, MacLeans, Farquarsons, Camerons, Gordons, Stewarts and many more.

As the sun sank in the sky, it shone a golden hue across Culloden Moor. A more hopeful image of this once blood-splattered field.

More on the Battle of Culloden

If you are interested in finding out more about the history of the Battle of Culloden, I recommend watching this video by Bruce Fummey.

For more short stories and facts about Scottish History, told with a good dose of humour, I would recommend watching more of Bruce Fummey on his YouTube channel, Scotland History Tours.

A Visit To Culloden … That’s a Wrap

I may have arrived at Culloden with Jamie, Claire, and tales from Outlander swirling in my mind, but I left, not with a connection to the fantasy characters of this tale, but with a heaviness of heart, for the real ones. For those who lost their lives, not only here, but in the ensuing atrocities in the aftermath of the Battle of Culloden, during the pacification of the Highlanders.

And the saddest part of all of this is that humanity continues to divide, fight, and take lives in the name of religion and power. Maybe that is why we enjoy fiction and fantasy. In Outlander, our hero survives. There is the hope of a happy ending.

As we drove away, a blood-red sunset soaked the sky.