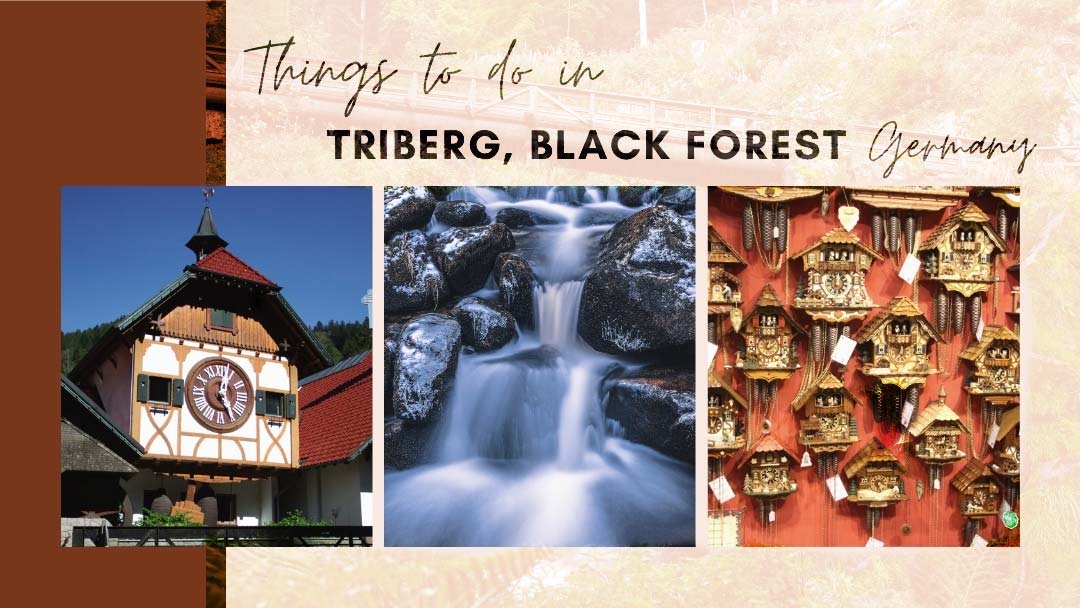 WHAT ARE THE BEST THINGS TO DO IN TRIBERG GERMANY?

This article covers the top ten things to do in Triberg, Germany.

Cuckoo clocks, waterfalls and a scenic railway, are just some of what to do in Triberg. We stopped in Triberg when we motorhomed through Germany on our European road trip and were enthralled and curious about its cuckoo clock fame.

Triberg, (Triberg im Schwarzwald) is in the Baden-Württembergin area, in the heart of the Black Forest in Germany.

The Black Forest is charismatic enough, but mix its fantastical forests with the whimsical world of cuckoo clocks and it becomes even more captivating.

[Note: Some of the links in this post will take you to a page written in German. To translate, right-click for the option ‘translate to English’]

SUMMARY OF THINGS TO DO IN TRIBERG

MAP OF TRIBERG, GERMANY AND ALL THE THINGS TO DO

HOW TO USE THIS TRIBERG MAP

To use this map, expand it using the square symbol on the top right-hand side. You will find the key on the left-hand side and the places we visited are marked with purple icons.

BEST THINGS TO DO IN TRIBERG

1. HOUSE OF A THOUSAND CLOCKS

The house of a thousand Clocks is a family-run business that started back in 1881 in a small workshop in the small village of Gremmelsbach, nearby.

Outside the shop, you cannot miss Triberg’s ‘Tribears Musical Family‘ and every 15 minutes you’ll see the action happening. The cuckoo pops out on the hour and every half-hour.

Step inside, and you enter the world of the cuckoo clock. Here, you’ll find cuckoo clocks from traditional to modern-day versions and everything between.

You will also find the World’s Most Exclusive Cuckoo Clock made with 617 Swarovski crystals and involved 215 hours of hand carving. This cuckoo clock includes a few 24-karat plated bears and two crystal pandas. It comes at a whopping price of 22,900 euros … but you do get free shipping;)

There are so many types Types of Cuckoo Clocks made in Triberg and they are even made with certain themes in mind such as:

Here’s a video snippet from the House of a Thousand Clocks in Triberg.

Most of the cuckoo clock makers in the Triberg area are family-run businesses that have continued the tradition down through the last five generations.

The intricate and detailed tradition of carving out these impressive timepieces began around the 1880s. Local farmers spent the long winter nights carving the clocks to earn some extra money.

Today, the Black Forest is famed for producing some of the best cuckoo clocks in the world.

Whether you are enchanted by the cuckoo clock or simply see it as a kitsch relic of rural Germany, expert craftsmanship is undeniable.

I am enchanted by these miniature houses with musical dancing figurines, kissing couples and the appearance of the cute little cuckoo marking the hour.

Interestingly, the cuckoo came about by accident. The story goes that a clockmaker wanted to produce the cockerel noise of ‘cock a doodle doo‘, but the only resulting noise he could engineer was the cuckoo noise.

I’m rather pleased that the ‘cock a doodle’ didn’t make it to the final version.

The ‘cuckoo’ noise that we hear is formed by the use of two tiny bellows opening and closing. You can see the internal workings of the bellows and other parts of a cuckoo clock in a display at the shop.

2. THE LARGEST CUCKOO CLOCK IN THE WORLD

It measures 4.5 meters high and 4.5 metres wide and the ‘little’ cuckoo itself weighs over 150kg. It is a magnificent piece of engineering and was created as an exact replica of a small cuckoo clock on a scale of 1:60.

Between 1984 and the year 2000, the world’s largest cuckoo clock was the one built by Josef Dold in Schonach.

However, since the Eble family took that prized award in 2000, this cuckoo clock house now holds the record of being the first World’s largest cuckoo clock.

In the Triberg Town Hall, the council chamber room is designed all in wood with interesting carvings of life in the Black Forest. It’s on the first floor of the Town Hall and is free entry. Karl Josef Fortwängler designed it in 1926.

The Schwarzwald museum (Black Forest Museum) gives you the opportunity to step back in time and learn about local crafts, traditional costumes and customs of the Black Forest area and what life was like through the ages.

There is also a mini “Schwarzwaldbahn” – a miniature railway, highlighting the importance of the Black Forest railway and you can learn the history of Triberg’s silver and silica mining.

The museum has a small cafe so you can also grab a coffee and a slice of Black Forest cake.

You can find prices and opening times on their website here.

The Blackforest Railway Adventure Trail takes you along varied scenery with panoramic views over Triberg. Along the way are information points detailing the history of the Black Forest Railway. There are two trails, the lower and upper Railway trail.

The main trail, the lower trail, is a six-kilometre loop that starts and ends at Triberg Railway Station. It conveniently passes by the world’s largest cuckoo clock, so you can kill two birds with one stone – or should I say cuckoos?

The railway line has 32 tunnels in the Triberg area and it is known as one of the most picturesque railway routes in Europe.

See our map above for the trail’s route and you can download a PDF map and the various information ‘stations’ here.

The Wallfahrtskirche is a baroque-style church dating from the early 1700s.

But the history of the church goes back to the year 1644 when a couple of miracles are said to have occurred due to a nearby water source.

The first story tells of a young girl’s eye being healed, and the second, that a man named Friedrich Schwab was cured of leprosy. Friedrich was so grateful that he placed a small statue of the Virgin Mary into a hollow of a pine tree – thus the name of ‘Maria in der Tanne‘.

There is a trail called the Kulturweg which takes you by the church and around a small lake, Bergsee.

Although Triberg waterfall, (Triberg Wasserfall) is touted by many as Germany’s highest waterfall, it actually isn’t.

That accolade falls to the Röthbach Waterfall near  Lake Konigssee in Bavaria. But Triberg’s waterfall is more easily accessible and the claim, though false, is helpful for Triberg’s tourism industry.

The waterfalls at Triberg plummet 163 metres into the Gutach River below and can be reached from several entrance points.

The main entrance to the Triberg Waterfall is located in the town and a two-kilometre walking trail guides you to the top of the falls.

The Triberg waterfall is lit up at night until about 10 pm.

Prices and opening times are on the Triberg Waterfall site here and you can download a map of the Falls and the three walking routes here.

We didn’t do the high ropes course in Triberg, but we did do a very similar ropes course in Switzerland. It was great fun, though challenging for me — I couldn’t lift my arms the next day!

If you love a bit of a challenge, give this a go — forest views from a different perspective.

There is both an easier and a more challenging option.

The rope course is open from April to October. For opening times and prices check this website.

If you are visiting Triberg or its surroundings at Christmas time, then you can enjoy the annual Triberger Weihnachtszauber.

This Christmas festival lights up the town with over a million fairy lights and includes fireworks, music and a magical tunnel of lights that lights your way to the Triberg Waterfall.

The weather in Triberg, Germany, as in most of central Europe, can be unpredictable.

The best weather is likely to be in the summer months, June to September. That being said, good weather isn’t a guarantee and those months are also the busiest; with both locals and international tourists visiting the Black Forest.

We were in Triberg in mid-May, the shoulder season, so there were fewer tourists.

We didn’t have brilliant weather, and although rain intermittently bucketed down when we were there, there were enough ‘inside’ options to keep us busy until the clouds cleared.

You can see the rain in our video snippet above;)

Rain is also a good excuse to seek out a cafe (of which there are several in Triberg) and sample the local Black Forest cake.

The winter months can be cold in Triberg, but Germany is known for its amazing Christmas markets and Yuletide celebrations and Triberg is no different. A visit to the Triberger Weihnachtszauber looks like it would be an excellent winter experience.

WHAT TO DO IN TRIBERG, GERMANY… THAT’S A WRAP

Triberg is a great place to visit in the Black Forest and there are plenty of things to see and experience. Our favourite was definitely looking at all the different types of clocks and marvelling at the intricate designs.

If you don’t have time to spend the whole day in Triberg, then the House of a Thousand Clocks is right on the main road so it’s easy to stop and have a quick look at Triberg’s amazing cuckoo clocks.

What would you most like to do in Triberg? Or, if you’ve already visited, what was your favourite experience. We’d love to hear from you.

Save and Pin for Later