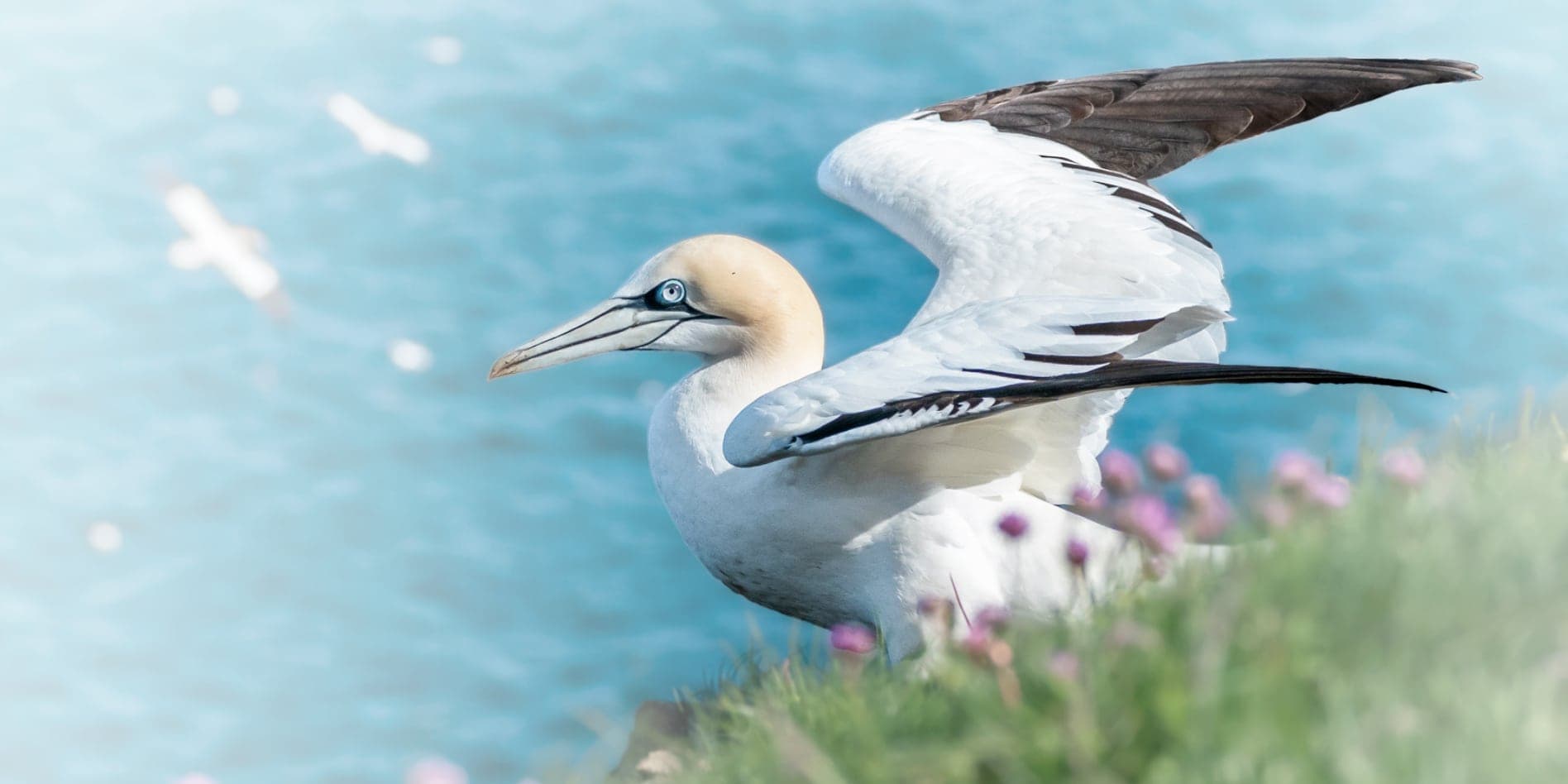 Nearing Troup Head’s plunging cliffs, in Aberdeenshire, we climbed the grassy hill, embellished with masses of pretty sea pinks (cliff-top flowers, also known as sea thrift). A cacophony of raucous squawks, combined with an insipid fishy smell wafting up from the cliffs, greeted us.

As we reached the cliffs, we gaped at the thousands of gannets crammed together on precarious ledges over the ocean. Countless more soared between the cliffs and over our heads.

Gannets galore — an absolutely glorious sight for avid bird photographers like ourselves.

In fact, while we were busy snapping away, it felt like they were just inches from our heads as they came into land, bills loaded with clumps of grass and seaweed for their nests.

It was a spectacular experience watching the largest of Britain’s seabirds carrying out their nesting activities in such close proximity.

Swooping by at eye level, showing off their subtle golden-hued head, bright blue eyes and vivid white bodies, they seemed unperturbed by their admirers at the top of the cliffs.

Not being previously familiar with these incredible seabirds, gannets are now up there running a close second to my puffin obsession.

The Troup Head gannets flock to Troup Head cliffs in their thousands just before spring, providing a thrilling display until they leave again in August and September.

We watched for hours as the gannets busied themselves with their nesting activities. We even caught a glimpse of eggs underfoot.

Troup Head is in the northeast of Scotland, overlooking the Moray Firth. Details on how to get there can be found further on in this post.

About the Northern Gannet found at Troup Head

The Northern gannet (Morus bassanus) is part of the booby and gannet family.

The adults are white with black-tipped wings, creamy gold-coloured heads and blue eyes. Their wingspan can reach up to two metres and, although their landings can seem rather clumsy on land, at sea, gannets are renowned as excellent divers.

They dive head-first into the sea at speeds up to 60km/h with their wings folded back. Watch this fascinating feat in this BBC video clip. The gannets eat the fish underwater or as they reach the surface.

Northern Gannets are monogamous and renew their bonds, at the breeding colony, called a gannetry.

The male and female greet each other at the nest site by head shaking and the female offers its neck for the male to preen. The gannets also clack their beaks together, much like puffins, as part of their bonding ritual.

The female gannet lays one egg in the nesting season, normally around April time, with incubation taking around 45 days.

Both parents feed the young, taking turns to venture out on fishing excursions that may last several days.

Their young are a dark greyish colour and are featherless when they first hatch. But the baby gannets (called guga), soon develop white fluffy down and start to resemble an unruly cotton wool ball with a black beak.

The feeding process involves the chick putting its head into the parent’s beak. It almost looks like the parent is trying to swallow the poor guga.

At about 5 weeks old, black feathers begin to grow, which distinguishes the chicks from older gannets.

A controversial annual practice carried out in Ness, Lewis, in the Outer Hebrides, is that of hunting and clubbing 20,000 gugas on the remote island, Sùla Sgeir. The tradition dates from before the 15th century, but today only 10 men are granted a licence to hunt the three-month-old chicks, which are then pickled and eaten as a delicacy by locals. The practice was cancelled in 2020 due to Covid but continued in 2021.

The hunting of sea birds was outlawed in 1954, with the exception of the Island of Sula Sgeir.

The parents will feed the guga a couple of times a day for about 3 months. By the time they are ready to fledge, the gugas are chubby little things. These juveniles are so buoyant that they can’t dive, and need to slim down before mastering their diving prowess.

Gannets are on the UK Birds of Conservation Concern Amber List, meaning that the northern gannet’s conservation status is of moderate concern.

Even so, Nature Scot found the Ness traditional practice of hunting and eating guga to be sustainable. Their studies found the culling was not affecting gannet numbers.

When Can I see Gannets at Troup Head?

The gannets start to arrive at Troup Head in late January and leave again from late August to early October.

If you visit Troup Head in April and May, you are likely to see the gannets flying by with nesting materials such as seaweed, grass and feathers. If you look carefully, you may also spot eggs under the feet of the nesting gannets. They lay their eggs around April or May.

The chicks hatch from about mid-May onwards. So, if you visit in June, you’ll find Troup Head cliffs full of chicks resembling white puffballs, before they grow their black feathers at about 5 weeks old.

The best time of day to watch and photograph the Troup Head gannets is early morning or late evening when the light is softer and there are fewer visitors at the cliffs. (The small 20-car carpark can fill up quickly in the gannet viewing season).

Where Can I see Gannets in Scotland?

Scotland has over 40% of the world’s total population of northern gannets. According to the RSPB, around 180,000 pairs breed in Scotland.

Troup Head is the easiest place to see gannets in Scotland because it is the only mainland colony in Scotland.

However, Bass Rock, in the Firth of Forth, becomes completely covered in tens of thousands of gannets in spring and summer and is the largest gannet colony in the world.

Getting to Troup Head Nature Reserve

The RSPB Troup Head Nature Reserve is an absolute gem of a find in Aberdeenshire and is just over an hour’s drive from Aberdeen.

The RSPB Troup Head Nature Reserve is signposted off the main road, B9031. From there, the narrow road leading to Troup Head car park (see map above) is signposted with small RSPB signs. These are handy, because at one point you drive through Northbridge Farm and, if the signs weren’t there, you’d think you were on encroaching on private property and going the wrong way.

As you near the car park the road condition is poor with lots of potholes, so drive carefully.

Once at the Troup Head car park, the cliff path walk leads you to the RSPB Reserve and gannet viewing points. The viewing point is about a 1.6-kilometre walk from the car park along some uneven and unsurfaced paths.

The cliff face is unprotected so do be wary of the steep edges.

What Else Can You See at Troup Head?

Although the main attraction of Troup Head is the gannets, there are several other birds and sea animals that you can spot from the cliffs here.

Guillemots and razorbills nest here and sometimes a few puffins are spotted. However, we only saw guillemots, along with the gannets of course, while we were there.

Bring your binoculars when you visit Troup Head because you may be able to glimpse porpoises, minke whales, dolphins or even orca off the coast.

We will be visiting more regularly now we’ve discovered this gem so we will keep you posted.

Our visit to view the Troup Head Gannets went far and beyond our expectations, and as photographers, we were blown away by the fabulous photographic opportunities that arose.

Having the gannets soar past at eye level, and hovering just metres from us as they assessed the wind and planned their landing, was incredible.

Any time we spend amongst nature is precious, but to be able to sit amongst the cheerful sea pinks watching these attractive birds on this scenic coastline of Scotland has to be one of our favourite animal encounters.