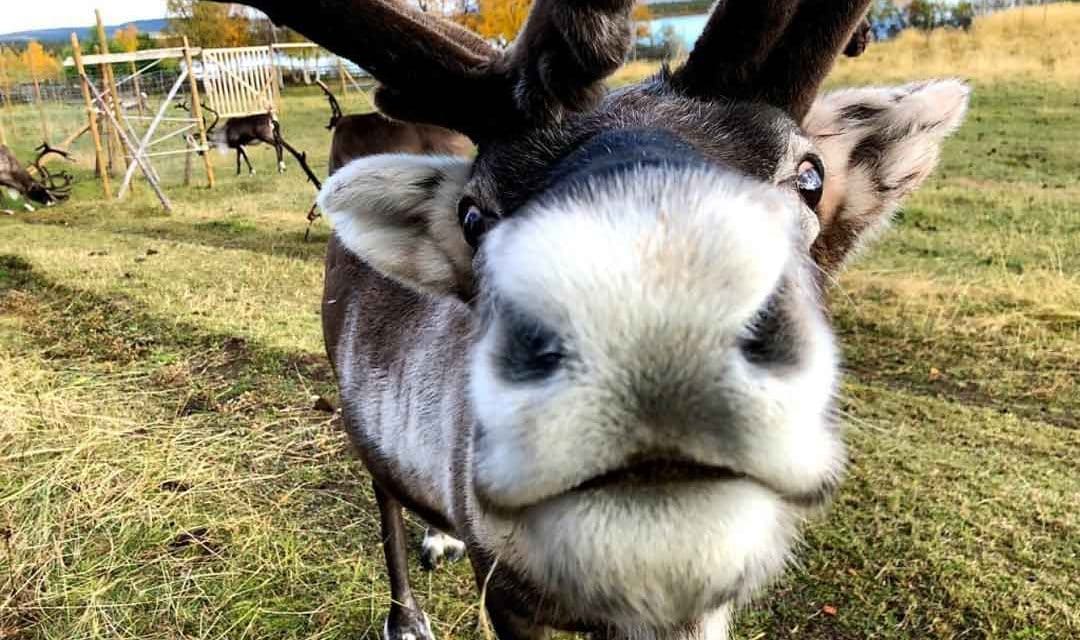 We didn’t get to meet Rudolph or even Dasher, Dancer, Prancer or Vixen, but our encounter with the lesser known crew, at Nutti Sami Siida, was no less endearing.

Being up close and personal with these reindeer, you can’t help but get a sense of their differing personalities. Either that, or we’ve watched far too many movies such as Bambi, Rudolph the Red-Nosed Reindeer and Frozen – where ‘Sven’, the reindeer, steals all of our hearts.

With the Nutti Sami Siida reindeer nuzzling beside you, the line between fantasy and reality becomes blurred. You almost expect one to start up a conversation. Yes … perhaps too many movies.

We’d arrived at Nutti Sami Siida, firstly, because it was only 900 metres from the 365 Ice Hotel and secondly, because we knew very little about the Sami indigenous culture.

Nutti Sami Siida, is a reconstructed Sámi Camp in Jukkasjärvi, Sweden. The town itself was an old Sámi Market and assembly place. In the camp, there are various outdoor displays which teach you about the traditional lifestyle of the Sámi people.

The Sámi people lived a nomadic lifestyle in Northern Europe over thousands of years. Herding reindeer, animals well-suited to Arctic conditions, were, and to a lesser degree still are, an integral part of that culture, with the reindeer being a source of food, milk, clothing and transport.

The main stars of the show for us, however, were the reindeer themselves. We were surprised that they were so friendly, but as we were told later, ‘they are very keen on food’. As we had a bag of reindeer food pellets, the reindeer were keen on us too. They ‘clicked’ their way around us and nuzzled for the food. The clicking noise is created by their knees and occurs so that when vision is poor, such as in a blizzard,  the herd can stay together.

You can make friends easily with a handful of pellets

Being able to get so close to these incredible animals was in itself a treat, but to see them in their ‘shedding phase’ was even more interesting. In fact, we didn’t know that this was even a thing, and we were luckily warned, not to be alarmed, by reception beforehand.

The ‘shedding’, is the antler ‘velvet’ coming off.  It occurs in Autumn, and although it can look exceptionally gruesome, it’s just like a snake shedding its skin. It happens as preparation for the rutting season, where the males go head to head for domination and to win over the females. The male’s antlers then fall off around November and grow again in spring.

The ‘shedding saga’ that was playing out on a few of the reindeer, looked more like a scene straight out of a horror movie, or the ‘Walking Dead’. In reality though, this is nothing more than nature showing us once again that she is the queen of creativity and wonder.

Male Reindeer shedding its velvet from its antlers

In the wild, they often scrape their shedding antlers on trees and such to clean and buff them up to attract the females. The reindeer here at Nutti Sámi Siida are all male, domesticated (and therefore castrated).

With no females around to impress, they were kind of letting themselves go. A little like settling for ‘middle age spread’; no one to impress so not too much of a worry. A strip of blood-soaked hanging skin here and there wasn’t going to bother them in the slightest.

The velvet shedding off the antlers

The camp here at Nutti Sami Siida started as a way to raise money to help feed the reindeer population. With increased deforestation and climate change, the reindeer were finding it harder to find food in the wild. Until recently, the camp was only open in the winter months, the busiest tourism months here in the Swedish Lapland. However, it is now open in summer and autumn too.

As well as the outdoor displays highlighting aspects of Sami Culture, reindeer interaction, and some interactive children’s activities, there is also a café, and a small shop selling Sámi handicrafts.

As expected there are traditional Sámi foods available. For lunch, we ordered Reindeer Suova. This is a Sámi flatbread filled with finely sliced smoked reindeer, lingonberry cream and salad. The meat was cooked on the open fire in the middle of the restaurant. Lars tucked in and found it delicious. I was not so keen on the taste (or the idea of eating reindeer, especially when we had just been feeding them!). I do eat meat but…Bambi?

Lars also had a Sami coffee which was cooked in a pot over the fire. It had a lighter taste to Turkish coffee and he found it palatable and worth trying. However, he won’t be giving up the Nescafe Classic Blend anytime soon.

The cafe feels so homely

A good coffee but surprisingly not overly strong

The café, with the centrepiece fireplace, made for an ideal spot to share stories. As our meals and coffee were being prepared, we chatted to the staff who shared a few tales about the reindeer.

The reindeer here at Nutti Sami Siida all have names based on what they look like, the names being the Sámi translation. For example, white hooves, antlers pointing forward, antlers pointing back, spotty face and so on. With reindeer being such a huge part of the Sámi culture, the language has developed around this too. The Sámi have specific and precise words related to reindeer description. So much so, that in a herd of several thousand deer, only one will fit a particular description of fur, antlers, sex and age.

We were told some of the Sámi names, but as the names were so ‘foreign’ to us they didn’t really stick. In fact, they didn’t land in the first place, let alone stick!

FANCY CASTRATING A REINDEER WITH YOUR TEETH?

Working reindeer are traditionally castrated because they then become more docile. It is said that the Sámi used to castrate the reindeer themselves, by biting into their testicles. I can’t even begin to imagine how that worked, but thankfully there are rules in place today to prevent any such practice – just in case you ever get the feeling that you’d like to chomp down on a pair of reindeer’s testicles.

I did find this video by Matthew Ingro on YouTube if you’d like to see this type of castration in action.

EVER HEARD OF A REINDEER PULLING A SICKIE?

Our initial feeling that the reindeer had distinctly different personalities wasn’t so off the mark. Apparently, here at Nutti Sami Siida, the group are a real mixed bag. Some are really keen, others lazy and a couple of them are just plain stubborn. One of the reindeer is so sneaky that for three years in a row, at some point during the winter season, he has faked a limp. However, once he is pulling the sleigh he is totally fine. He just doesn’t want to be chosen. I bet we can all relate to that feeling.

We visited in autumn but we imagine the winter season, although busier, would be just as interesting. Having a sleigh ride through the winter landscape with Rudolph’s friends pulling you along in front must be an absolute delight. In fact, did you know that the ‘red-nosed reindeer’  isn’t just a creative invention? Again, nature beat us to it.  Reindeer noses have a dense network of blood vessels, essential for regulating their internal body temperature.

So although they can’t fly, reindeer are very much like Rudolph after all.

To use this map, expand it using the square symbol on the top right-hand side and you will find the key on the left-hand side.

The Nutti Sami Siida website has up to date transport details.

We would like to thank Nutti Sami Siida for allowing us to look around and ask lots of questions.

Have you visited here or do you have any reindeer experiences of your own? We’d love to hear from you in our comment section below.

YOU MAY ALSO ENJOY READING