Things to do in Matera, Italy: Unique Experiences to Enjoy 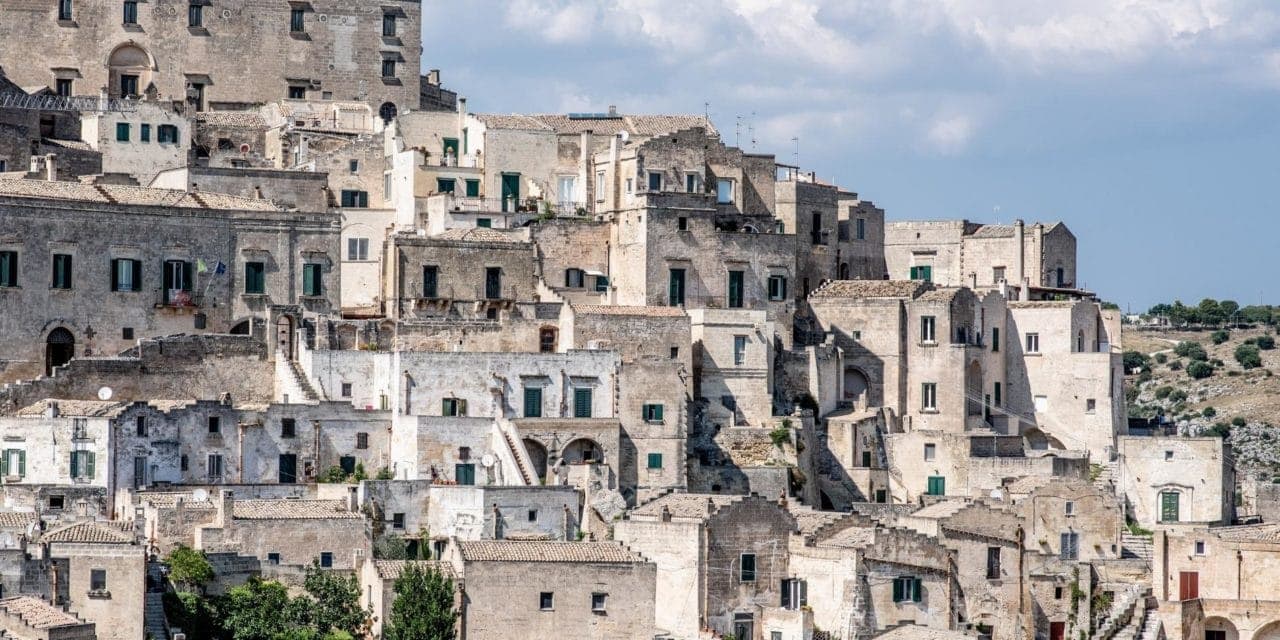 Home » Destinations » Things to do in Matera, Italy: Unique Experiences to Enjoy

Things to do in Matera, Puglia, Italy

In this article, you’ll find some of the best things to do in Matera, and also get a glimpse into its interesting history that has seen this ancient city rise and fall over the centuries.

As we wandered around Matera, the mist filled the ravine.

The wispy fog followed us around the winding, narrow alleyways and stairways of this eerily haunting place.

Matera seeped into our souls.

THINGS TO DO IN MATERA: QUICK VIEW

MAP OF THINGS TO DO IN MATERA

This map of things to do in Matera highlights the places to visit in Matera and other relevant places that we mention in this Matera Blog Post.

Click on the right-hand side square box to expand, and the left box to see the Matera Map key.

The ancient Matera city lies in the region of Basilicata, in Southern Italy.  It is built on a rocky outcrop above the vast limestone ravine known as the ‘Gravina of Matera’.

Matera was once the proud, prosperous capital of the region. However, it suffered greatly from the changing world and began a steep decline. In fact, the demise was so great that Matera became known as the ‘Shame of Italy’.

However, this once destitute city has been reborn. It has risen from the depths of poverty, desperation and misery and continues to rise. So much so, the European Union awarded Matera Italy, the coveted title of European Cultural Capital of 2019.

Matera, a Unesco World Heritage site, is known for the hundreds of cave dwellings on its mountainside (Sassi di Matera) and the city is set in amongst a wild landscape with a myriad of ancient rock churches.

THINGS TO DO IN MATERA

We would recommend a visit to ‘Casa Noha’ to absorb a real historical sense of Matera.

It’s a great place to start your visit and gives more meaning to your strolls through this ancient city.

Films are displayed on the walls of this old home and you are taken through the extraordinary journey of Matera’s history.

We were unprepared for the effect that Matera would have on us.

Death, disease, and horrific deprivation had brought this once fine-tuned, prosperous city to the depths of despair. But, its history was also its saviour, and it is rising once again.

Matera – The Shame of Italy

In the 17th century, Matera had evolved into a well-balanced, insular and self-sufficient town. It was in harmony with the environment.

However, in the 18th-century things changed.

Trading increased and many new immigrants arrived.  As a result, Matera became overpopulated and thus began the breakdown of its sustainability.

By the 1940s, thousands were living in atrocious conditions in the Sassi.

Harrowing footage showed families cramped together with their animals.

Disease was rife due to the lack of running water and heating. The infant mortality rate was a heartbreaking fifty per cent.

This was largely due to the influential writings of author Carlo Levi. He had visited the Sassi di Matera and was horrified at the living conditions.

This sparked a reaction within the media and Matera became known as ‘The Shame of Italy’. Politicians finally began to take an interest in the plight of the Sassi di Matera.

In 1952, the government ordered that the Sassi homes were unfit for human habitation. They moved about 15,000 of the population to new quarters, located in the more modern part of Matera.

The abandonment of the area led to further degradation of the Sassi.

In the 1980s,  a group of young people lobbied for the restoration of the Sassi. They had found abandoned archaeological treasures, including the ancient rock churches and believed that the city of Matera should not become forgotten.

Eventually, their determination and persistence won through and people started to return to the Sassi.

The old quarters of the town consist of a labyrinth of cave dwellings (Sassi) built into the soft limestone rock. The roofs of many of the Sassi are the foundations for the next.

It is hard to imagine that some of the holes in the rocks were once entrances to a home.

The Sassi began as a prehistoric troglodyte settlement and it is believed to be among one of the first human settlements in Italy.

Knowing their history and the story of how Matera became known as the shame of Italy, made visiting the sassi particularly evocative.

3. VISIT THE CAVE-DWELLING OF VICO SOLITARIO

The Cave Dwelling of Vico Solitario is a museum within one of the caves. It displays typical period furnishings and artisan tools and provides an interesting insight into the peasant way of life within these dark, cramped caves.

In a typical cave-dwelling, a family, with on-average six children, lived with their animals. In a small alcove of the cave would be the animal stall. This often contained a mule, pigs, chickens and other farm animals.

There were no toilet facilities, only a ‘cantero’,  a terracotta pot with a wooden lid kept by the bed.

4. VISIT THE CHURCH OF SAINT MARY OF IDRIS

This spectacular church, the Church of Saint Mary of Idris,  is carved into the rock and takes pride of place above the old city of Matera. The church dates back to the fifteenth century and has a small bell tower.

From in front of the church, you can have more amazing views of Matera.

On the next level down from the Church of Saint Mary of Idris, you’ll find the church of San Pietro Caveoso. This church, also known as the Church of St Peter and Paul, was originally built in 1218 but has undergone many refurbishments since then.

Just wandering around these narrow winding paths and getting lost in the maze of steps and alleyways is a delight in itself. The variety of architecture, churches and Matera’s ancient aura captivated us.

Include the Belvedere Piazzetta Pascoli (see map) on your stroll through the old city. Bel vedere means best view and from this point, there are fantastic views across Matera.

Another great viewpoint is the Belvedere Luigi Gurrigghio, which is near to Matera Tourist Information centre.

There are also guided tours available if you would like a more structured and informative walk through Matera.

Check out this 2 hour Guided walk through Matera,  and many other available tours and activities n Tripadvisor here or Get Your Guide

The landscape around Matera, in the Murgia National Park, is characterised by deep ravines and vast highland plateaus. Hidden within the nooks and crannies of this wild landscape are ancient caves, rock churches, fortified farmhouses and shepherd tracks.

These all provide rich evidence of the traditional human settlement that evolved alongside the natural environment. Walking across this rugged landscape with a view across the pale, sepia buildings evoked a biblical feel.

It is hardly surprising that this was the background used in the filming of the controversial movie, ‘The Passion of Christ’.

From the Jazzo Gattini Visitor and Environmental Education Centre  (see map) in Matera, you can get maps and details of the many trails in the area.

The trails offer panoramic views across the ravines and lead you to explore the rock churches and pre-historic villages. There is also a small museum there and the possibility to watch short films about Matera and the Rupestrian Churches.

7. VIEW MATERA FROM THE VIEWPOINT OF MURGIA TIMONE

From here you have a marvellous view of Matera City the Gravina de Matera and the Sassi di Matera.

You can also get to this point by walking from Matera, across the Ponte Tibetano della Gravina.

8. VISIT SOME OF MATERA’S ROCK CHURCHES

Within the Murgia National Park, is the Park of the Rupestrian Churches.

Here there are over 150 ancient rock churches, with origins mainly from the Middle Ages. Throughout the centuries some of the churches have also been used as homes or animal shelters.

In 1993, UNESCO added both the Sassi di Matera and the Park of the Rupestrian Churches to the World Heritage List. We came across this tiny Matera rock church, Chiesa Rupestre di Madonna delle Tre Porte, and its peeling frescoes just near the Murgia Timone observation point (above).

For a 3 hour guided tour in the area, including visits to the rock churches check out this trip on TripAdvisor or Viator.

9. VISIT THE FILMING LOCATIONS OF THE JAMES BOND MOVIE, NO TIME TO DIE.

Matera features heavily in the James Bond Movie, ‘No Time to Die‘.

Here is a trailer that features the narrow alleyways and streets of Matera.

As reported in GQ Magazine, The bridge, Puente Gravina in Gravina In Puglia was computer-generated into the scenes in Matera, so it looks like the bridge actually crosses the ravine beside Matera. However, this beautiful two tiers Roman Bridge bridge, which 007 James Bond jumps off of is actually about 30km from Matera.

10. TAKE A DAY TRIP TO ALBEROBELLO

Take a trip from Matera to the nearby town of Alberobello to visit the unique Alberobello Trulli. Alberobello is only about an hour and a quarter drive from Matera so this heritage-listed site is an easy visit and a must-see while in the area.

It is an enthralling place and its unique trulli look like mini-homes that might house fairies and goblins.

Your Matera to Alberobello experience will be well worth it.

WHERE TO STAY IN MATERA, ITALY

There are heaps of accommodation options in Matera, where you can choose to stay in a guest house in the old town in a traditional refurbished sassi or in a newer type of accommodation.

Our camper site, at Masseria Radogna, was in the Murgia National park.

This is also where the Visitor and Environmental Education Centre was located.

As the roads in Matera are extremely narrow, and our van wasn’t, it was very fortunate that the manager, also offers a shuttle from the campsite to Matera.

The closest airport to Matera is at Bari, on Italy’s eastern coast and is about an hour’s drive.

The easiest way to get to Matera is by travelling in your own vehicle as taking public transport to the town is not particularly easy and can be time-consuming.

However, if you need to take public transport you can get a train from Bari and then a bus to Matera, with the journey taking just over two hours.

If you are thinking of renting a motorhome we found the Motorhome Republic to be excellent and they found the best deals for us.

READ MORE:  Everything You Need to Know When Hiring a Motorhome

Things to do in Matera … That’s a Wrap

We’ve listed nine things to do in Matera here, but part of Matera’s charm is to wander without an agenda and discover your own hidden gems in amongst the monochromatic web of alleyways and streets.

We’d love to hear what you discover and about your favourite parts of Matera.

You may also Enjoy Reading