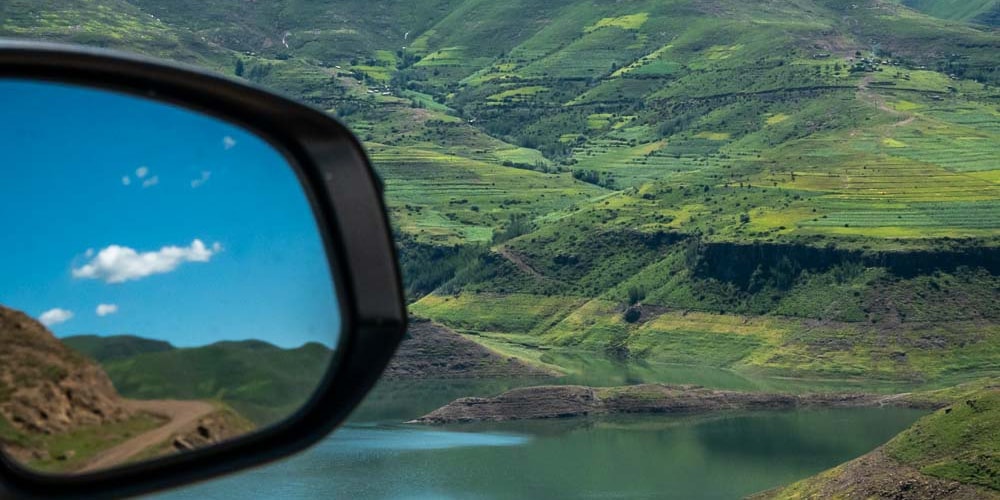 Lesotho is a mountainous playground where you get to stretch the legs of your 4×4 on a fantastic Lesotho road trip. This trip takes you along part of the Roof of Africa Scenic Route and through the Maluti and Lesotho Drakensberg mountain ranges.

Our two-day road trip is one-way, but if you have more time you could do a loop, incorporating more of Lesotho and exploring more 4×4 trails.

You won’t encounter much traffic as you road trip Lesotho, locals tend to either walk or travel by horseback. But you may come across the odd yellow taxi.

This autonomous country lies bounded on all sides by South Africa. Not only does Lesotho offer 30,355 square kilometres of wild countryside to explore, but it also has relatively easy access from South Africa.

Lesotho definitely qualifies as one of those off-the-beaten-path places and is perfect for a 4×4 road trip.

We spent two days during February traversing the country on our Lesotho road trip; entering from the north, passing Katse Dam and exiting via South Africa’s iconic Sani Pass. The best months to visit are between September and April when it’s possible to avoid any snow on the roads.

Our route took us over tarred, gravel and 4×4 roads (nothing too extreme), giving us the opportunity to get a good feel for this less frequented destination.

We found the Basotho people here were quick to smile and return our waves, whilst the children were very friendly and especially excited with the chalk, stickers and ‘bonbons’ that we shared out amongst them.

As mentioned, some of the routes we took on day two are definitely 4×4 access only, so plan accordingly for the right vehicle. Luckily, having bought our own 4wd bush camper in South Africa and having completed an off-road course with Protea 4×4, we ensured that we were well equipped to handle whatever conditions Lesotho chose to throw at us.

HOW TO GET TO LESOTHO: BORDER GATES AND OPENING TIMES

Here are the border gate listings starting at Caledenspoort (north of Lesotho) and progressing clockwise. The names with * italics are 4×4 access only.

You may wish to follow our route one way through Lesotho, or you can travel the whole Roof of Africa Scenic Route by looping back to your starting point.

Caledonspoort Border Control, roughly 10km from the town of Fouriesburg in South Africa, is one of the main entry points into and out of Lesotho.

The first gate is where you stamp out of South Africa and you then move forward a few hundred metres to be stamped into Lesotho.

Entering Lesotho was fuss-free. Just a show of the passport, some entry stamps added with our estimated exit date and a small toll fee amounting to 40 Lesotho Loti (LSL), which was equivalent to Rand 40 or USD $2.40. This fee was paid in person at a small kiosk by the checkpoint.

About 7km later, sticking to the tarred road, we drove through our first township of Butha-Buthe where we joined the A1 going south-west towards Maseru.

Not intending to venture anywhere near the capital city, after 40km and reaching the township of Hlotse, we swung onto the tarred A25 going east.

Up to this point, we were passing plenty of signs of habitation. Small villages with locals going about their daily business, the usual township hustle and bustle, along with the yellow-signed mini-van taxis weaving in and out of the road — seemingly a law unto themselves.

It wasn’t until the township of Hlotse was disappearing into the distance behind us that we began to feel what the true essence of Lesotho might be like. Green rolling fields separated by hills soon gave way to mountains and steep, near treeless slopes.

The road is also shared by shepherds moving their cattle and sheep between fields. A popular dress code of shepherds is a thick grey woollen blanket covering, along with a pair of white gumboots.

We stopped to have a look around and realised that we were actually the only vehicle in sight for as far as the eye could see. No wonder we were drawing plenty of interest from the locals.

Sticking to the A25, the flat fields soon yielded to overlapping mountain slopes as the road began to ascend. Ahead, the Mafika Lisiu Pass rose above us from an altitude of 3090m, sending out an unspoken challenge to chance the climb.

Just a word of warning, good-sized rocks can fall from the slopes above and scatter on the road. There are lots of winding sections and it takes a while, but upon reaching the summit, and parking at the viewpoint the reward is the view of the Mafika Lisiu Pass itself.

However, we weren’t alone at the viewpoint. Baboon troops also seem to enjoy the lofty heights. Their threatening screeches at each other had Shelley bolting for the car as fights broke out with baboons running everywhere.

As it turned out, this was the only ground-dwelling wildlife we were to see over the next two days.

A steep descent from Mafika Pass soon brings Katse Dam into sight with the A25 veering south following the contours of Katse Dam and crossing it roughly 12km later.

Now on the eastern side of the dam, the decision point arrives 2 km later where you could continue to follow the A25 away from the dam or do as we did, and veer onto the unnamed gravel road pointing to Matsoku Tunnel Outlet 5. This road parallels the eastern side of Katse Dam giving water views all the way.

Katse Dam was constructed in the early 1990s and collects the runoff water from the surrounding mountains, causing it to flow into the Malibamat’so River backing it up more than 30 kilometres. When full, the dam’s total surface area is 38.5 square kilometres. The water is initially piped and then free flows into the Vaal Dam for use in Gauteng Province, South Africa.

This gravel road was in reasonable condition although it does cross many small river crossings which would make for a wet crossing in the rainy season.

Beside each river is a village and because this particular day fell on a Sunday, kids were home from school. Our Hilux diesel engine must have sounded like the school bell as it drew kids from everywhere. We smiled, waved, said hello then stopped. Out came the chalk, stickers and the all-time favourites … ‘bonbons’.

The kids were all smiles but didn’t seem to get the idea of the chalk, requiring Shelley to draw on some roadside stones and then you could see from their big smiles that they understood. There was no hesitation then, with little hands shooting out for a piece of that coloured chalk.

The adults were never far away, every now and again casting a casual glance over at us, smiling and giving us big waves. We have to say though, it was just the best to see the joy on those young faces. It wasn’t just the one time though.

Over each hill, another village came into view, and along with it yet another group of kids waiting beside the road. Luckily we had plenty of stock to go around.

This stop/start routine with the kids continued until we re-joined the tarred A25, now just a handful of kilometres from the Katse Lodge Camping Area. To gain access to the campsite, you need to drive into a fenced compound past security and present yourself at Katse Lodge reception.

You’ll receive directions to an empty house on a nearby street where you can park in the backyard. There are hot water showers and an electricity point in the backyard which is just fine but the best part is the magnificent view over Katse Dam itself.

We had a leisurely start to the day, departing the campsite around mid-morning. However, if I knew what lay ahead, I would have set off way earlier. The first 33km of the A3 gravel road to Thaba Tseka starts in reasonable condition, but the final 24 km of road condition deteriorates with low range first gear for a good part of the way.

Rocky conditions up mountain passes place a real restriction on speed, making you pick your driving lines carefully. This must be an isolated stretch of ground because we didn’t see any other vehicles or people and being a Monday, even the kids were back at school.

Passing the village of Thaba-Tseka, the road conditions definitely improve. The road follows the mountain ridges across wider expanses allowing for spectacular views over the land with Mejonang Pass sure worth an excuse to get out and stretch the legs (S29.432150, E28.958309).

There were now increasing signs of humanity with pockets of villages close by the road.

Turning right at the junction of the A1 and A31 will place you on a direct route and a superb tarred road all the way to Sani Pass. This is another chance to soak up some great views as the road winds between mountains.

As fate would have it, our adventures had not yet ended for the day.

Unbeknownst to us, but apparently common at this time of year, thick clouds and fog were rolling up and over the Sani Pass making our passage of the few kilometres to the Sani Pass campsite very, very slow.

We passed the ‘Highest Point’ sign of Lesotho’s highest nearby mountain, Thabana Ntlenyana, which stands at an altitude of 3482m and claims the title of the highest peak in Africa south of Mt Kilimanjaro. But we didn’t stop because the light was fading and we had to continue on.

Visibility was now down to a few metres.

Not long after, we crawled into the Hilux and precariously drove a short distance in now ridiculously thick fog to the nearby campsite where we retired for the night.

The next day we walked to the back of the Sani Mountain Lodge to a perfect lookout above the winding Sani Pass road, gauging the drive that lay ahead of us.

Little did we know that this fog, which would hang around until midday the following day, would hamper but not thwart our descent of the iconic Sani Pass back into South Africa.

But that’s another story…

Trip to Lesotho with Organised Tours

If you haven’t got your own 4×4 vehicle, or a hired camper for a Lesotho road trip you may wish to book an organised tour, like these below:

Your Lesotho road trip can be as short or long as you want it to be. It makes for a great alternative to driving the circuitous roads within South Africa that bypass Lesotho altogether. And if you follow our route, the drive will culminate in the descent of the Sani Pass, another of South Africa’s iconic mountain pass drives.

If you’re travelling in South Africa, it’s likely that Lesotho will be close enough to warrant at least a couple of days to experience this remote mountain landscape. I’m pretty sure you won’t be disappointed, and at a minimum, will leave you with a story or two and some fabulous memories.