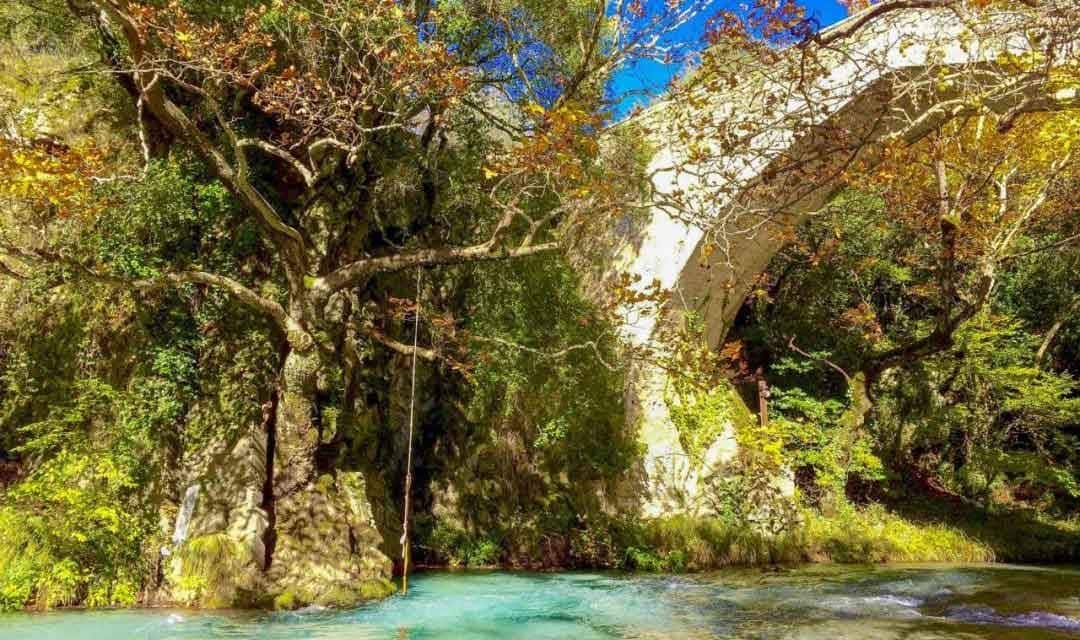 The fabulous Lousios Gorge hike in the Arkadia Region took us through spectacular scenery, past ancient ruins, to the cliffhanging Prodromou Monastery and to both the old and new Philosophou monasteries. built into the sides of the Gorge.

Lousios Gorge is in the mountainous Arkadia Region of Greece, in the middle of the Peloponnese. It is home to ancient Arcadian ruins and astounding cliff-top monasteries precariously perched overlooking the gorge. The scenery is stunning with plenty of shade if you are hiking the gorge in the warmer months.

There are several Lousios Gorge hiking options – we chose to start near the Ancient Gortys and parked in a small parking lot (see map). However, you can also start at Dimitsana or Steminitsa, in the car parks by the monasteries. For our Full Greece Campervan Road Trip Click Here

Continuing on our Greece road trip, we left Olympia with its buses of tourists and headed inland to a much less crowded part of the Peloponnese, to a town called Dimitsana, in Arcadia. We parked the motorhome in Dimitsana’s Water Power Museum car park for the night, which we had all to ourselves.

The next morning, we visited a beautiful little church, St. Ioannis, which overlooks the Water Power Museum. It was only a two-minute stroll and as we are keen geocachers, we found a little cache there.

Minutes later, a herd of about fifty goats strutted over the little bridge by the church – a common sight in these parts.

Dimitsana’s Water Museum demonstrates the importance water-power played in the area. It highlights the main pre-industrial techniques that took advantage of water to produce a variety of goods and it links them to the history and daily life of the local society.

The Water Power museum has a flour mill, fulling mill, and gunpowder mill. There is also a tannery exhibit showing the various stages of the processing of animal hides. For more details check out their website here and download a  leaflet with opening times, prices and more details here.

Leaving the water power museum car park, we headed to the spot where we would park the camper for our Lousios Gorge hike.

The Lousios River’s edge was about 30 metres away and the scenery was enchanting. Turquoise blue water flowed under the old, traditional stone bridge and autumn colours dripped from the surrounding trees. Not only was it postcard-perfect, but according to Greek Mythology, Zeus himself used to bathe here in the Lousios River. And no wonder, with such beautiful surrounding scenery.

Crossing the bridge over the River Lousios, you come to Ancient Gortys — an ancient Arcadian city. Some of the remnants are believed to be ancient healing grounds. We looked on, with the sound of nearby goats and the jingle jangle of their bells.

Ancient Gortys in the Lousios Gorge

The arch-shaped porticos in the wall seen below, are believed to have been round-backed seats as part of the ancient healing centre.

A short distance along the Lousios Gorge hiking path you come to Saint Andreas Church. Even in its state of disrepair, the remnants of frescoes on the walls are still visible.

Ayios Andreas Church Fresco can still be seen on the wall

The route along the Lousios Gorge Hiking trail gradually became steeper as we followed the signs for the Prodromou Monastery. The pathway led into a forested area and we soon arrived at the ancient Prodromou Monastery ‘Fulling-Tub’.

At first, we thought that ‘Tub’ meant it was the monk’s bath area (the clue word being ‘tub’) but later found out it was a water-mill where ‘fulling’ (a process of thickening the material in woollen cloth), took place.

Our research also led us to find out where the saying, ‘on tenterhooks’,  came from. In the fulling process, a cloth is strung tightly on hooks called tenterhooks.  Interestingly, in pre-medieval times, urine was used for fulling instead of water — how lovely!

After the Fulling-Tub, we crossed the ancient Prodromou Bridge ruins and continued our hike along the Lousios Gorge to the first Monastery on this route, Moni Agiou Ioanni Prodromou or otherwise know just as Prodromou or St. John the Baptist Monastery.  It’s absolutely amazing how this Greek Monastery hangs off the cliff face so high up; it would have been a great feat of engineering in its day.

Prodromou monastery dates back to the 16th century and was rebuilt in 1973 over the remains of an old hermitage.

A tour which leaves from Athens includes a visit to the Prodromou monastery and the water museum as well as other local sights. For more details check here on Tripadvisor here.

We reached the halfway point and were already feeling it in the legs (well I was – Lars seems to stride up the mountains as if we are still on flat ground, with me breathing heavily behind!). To my relief, the path led downwards for a while in the shade of the trees (which always means ‘up’ on the hike back …but light relief for now — forever the optimist)

Note: The Prodromou Monastery is closed between 1300 and 1700

The scenery along the Lousios Gorge hike

After walking through the forested path we arrived at the ancient Philosophou Monastery. From here, the view looking out across the Lousios Gorge was pretty spectacular.

View across the Lousios Gorge — the Prodromou Monastery can just be seen on the far right cliff face.

The ruins are accessible by climbing up the steep steps on the side. Once at the top, the ancient Philosophou Monastery was fascinating to clamber through. Needless to say, we spent a while investigating the little nooks and crannies. The spaces that the monks lived in were so small — like a modern-day version of tiny homes. It’s difficult to imagine what their life would be like living on the side of the mountain.

Steps to the Ancient Philosophou Monastery

An arched doorway of the Ancient Philosophou Monastery

A few more steps further on the Lousios Gorge Hiking path, you arrive at the more modern Philosophou Monastery.  As we approached the entrance, a friendly monk invited us into the reception area and offered us water and Turkish Delight.

He then gave us a book with an English page marked up to read about the history of the monastery. Neither of us had our reading glasses with us but for some reason, it felt wrong to not look at it, and the monk watched us intently. Lars seemed to be studying it very carefully; I did manage to squint and notice one date though, the ancient monastery was founded in 963 AD.

Gate to the ‘new’ Philosophou Monastery

After a quick look in the little chapel, we were ready to set off back to the campervan. A couple of cute cats laying in the sun outside of the chapel distracted me; they were both so friendly and just wanted a cuddle.

Lars, who is much more of a dog person, made the mistake of sitting down beside them and that was it! They were all over him and were extremely reluctant to climb off. In fact, once he had managed to prise them off, they followed us for over 200 metres back down the path. We did break into a bit of a jog where possible to discourage them from coming any further.

Our descent only took us an hour. It was a much easier walk on the way back, as the path was mostly downhill and we spent less time stopping to take photos.

The next leg of our Greece road trip took us towards Sparta, but just 30 minutes south we stopped at Karytaina for the night.

If you have time, we would recommend a stop at this medieval town on the steep hillside overlooking the valley of the Alfeios River (the main river that the Lousios River flows into). Karytaina is known for its mid 13th century Castle that still proudly sits atop the hill. A walk along the cobbled streets and a steep but short climb lead you to Karytania Castle. Parts of it have been renovated, but most of it remains as ruins harbouring the history and tales of times gone by.

A few minutes south-east of the town, you” come across the Ancient Karytaina Bridge. On one side of the bridge, there is a small Byzantine Chapel built into one of the bridge’s columns, dating back to the 15th century.

We were camping in our hired motorhome, but a good place to base yourself, if visiting the area would be Dimitsana or Stemnitsa.

For Booking.com Accommodation deals in that area click here.

Explore all the activities available to do in Greece here.

Have you done any of this hike? We’d love to hear your impressions of the place and the monasteries on the mountainsides.