Monemvasia to Nafplio: Roadtripping the Peloponnese 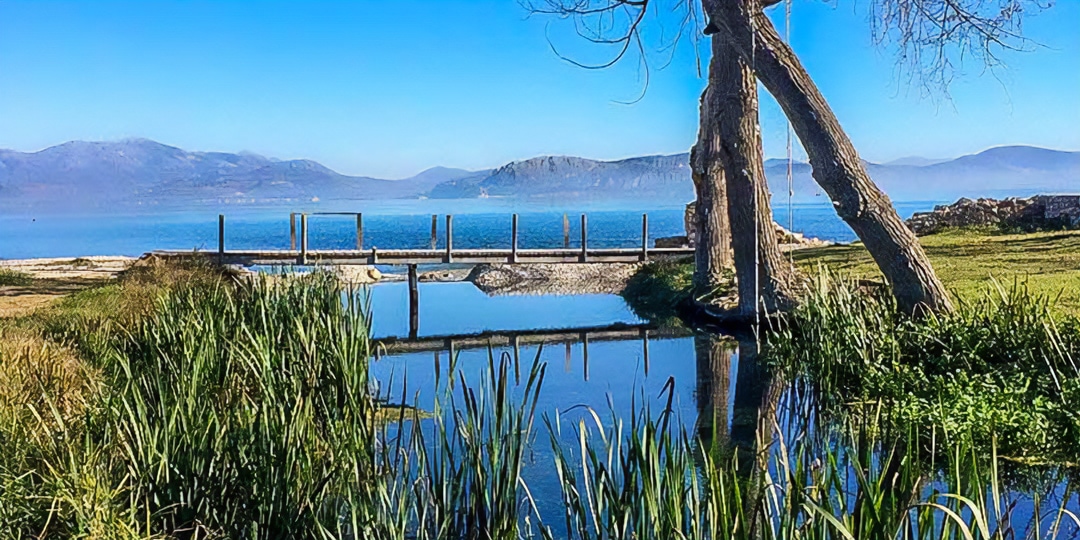 Old town Monemvasia took us unawares with its beautiful winding, cobbled streets, views of the fortified, towering hills and its sparkling coastline. It was definitely an unexpected pleasure on our travels around the Peloponnese of Greece.

The journey onward from Monemvasia to Nafplio was also full of interesting stops and interludes.

We had high expectations of our next destination, Nafplio, as it is often touted as the prettiest town in Greece.

But did it live up to its expectations?

Find it all out here.

Continuing our road trip around Greece, we arrived at Monemvasia, Peloponnese Greece, before heading north towards Nafplio.

This map shows the route we took travelling from Monemvasia to Nafplio. This route is definitely not short of scenic views and interesting stopping places.

As we approached the new part of Monemvasia, on the mainland, we could see the small, but commanding island which houses the old town of Monemvasia.

The island is connected to the mainland by a 200-metre causeway and we easily found a park for the van in a quiet empty car park ( Camper car park coordinates N36.6885 E23.036638). Scooting around outside of the busy tourist season has its benefits.

The old town of Monemvasia clings to the coastline on the island.

The next morning, we began our walk across to the island to visit the old town of Monemvasia.

Just short of the causeway, still on the mainland (new town of Monemvasia), we discovered an ‘Awarded Beach’. Only a portion of it was awarded though — as marked by the signs. Our best guess was that it had most likely won this accolade because it was remarkably clean of litter.

We cannot really say the same for many of the other beaches we have been to so far in Europe — I guess we might be a bit spoilt being used to our beautiful, pristine beaches in Australia.

Once across the causeway, there is a short walk around the side of the island before you come to the ancient fortress walls of old town Monemvasia. Stepping through the medieval castle wall entrance, you immediately feel like you are in a fairytale world.

As you stroll through the old, cobbled streets and arched passageways you occasionally catch ocean glimpses through small doorways, always within the watch of the towering hills above. The architecture and history of the town seep into your bones and you can almost hear the clatter of hooves and chatter of artisans from medieval times.

These kinds of experiences are just one of the many reasons to visit Greece.

The main street through the enchanting walled castle of Monemvasia is lined with cafes, tavernas, shops and artisans’ workshops.

In the upper part of the town are the ruins of mansions, that were once home to the Venetian aristocracy, and from here you have panoramic views of the area.

On one of the highest points on the island sits the Church of Agios Sofia. Originally built in the 12th century, it is one of the oldest Byzantine churches in Greece.

In the main square of the lower town of Monemvasia, you’ll find the largest medieval church in southern Greece, Elkomenos Christos.

As we wandered through the intimate laneways, the local stray cats were warming themselves in the winter sun but were keen to stir from their spot for some love and patting.

As it was the winter season, we pretty much had the place to ourselves. Therefore, Monemvasia definitely lends itself to a crowd-free winter visit.

You can then experience the magic of this walled castle town, and explore its beauty in peaceful surroundings. The only drawback may be that the weather is cool. However, we were there in November and the temperature was around 23 degrees C.

The most popular months for tourism are June, July and August, which also means that accommodation will be charging peak prices. However, the weather will be much warmer and swimming will more than likely be on the agenda.

THE MONEMVASIA TO NAFPLIO DRIVE

Our plan was to head from Monemvasia towards Nafplio, which we had heard was one of the prettiest towns in Greece. Nafplio was our next destination, but as usual, there were so many things to see and experiences to be had along the way.

As we headed from Monemvasia to Nafplio, our days were filled with canons and castles, goats and Greek mythology, olive trees and endless ocean views.

We left Monemvasia late afternoon, after a successful find of the elusive ‘Blueberry and Goji’ tea.  Yes, travelling Europe in a campervan is fun and full of exciting new adventures, but it can also bring about latent obsessions.

Ours happened to be trying as many flavours of tea and dark chocolate as we could.

STOPS ON THE WAY FROM MONEMVASIA TO NAFPLIO

We hadn’t gone far, about ten minutes out of Monemvasia, when we came to an idyllic little spot to park the camper for a day or two, Palaio Beach.

Leaving Palaio, we drove sedately through the mountains to Sampatiki, a pretty harbour town nestled among the hills of the Arkadian coast. After navigating some very narrow roads, we arrived in a car park overlooking the harbour.

For almost an hour, we just watched the comings and goings of this quaint harbour; fishing boats chugging in and out, locals collecting the day’s catch and someone in a wetsuit snorkelling and circling about the bay.

A great place to relax, have a drink and enjoy the idyllic view with the late afternoon sun streaming into the van.

On our third stop on the route from Monemvasia to Nafplio, we planned to have a look at a 2000-year-old olive tree situated in the village square of Koutroufa.

Its trunk measured about 11 metres in diameter, and for 2000 years old it still looked pretty hardy.

Apparently, the village holds an annual festival every July, the ‘Tribute to the Olive Tree’, where villagers share olive dishes and play Greek music.

Another detour on our way to Nafplio was to find a Geocache near the small village of Myloi.

Geocaching is an activity directed from an app that points you to a hidden location in search of a ‘cache’ or container where you can log your details on paper within and do the same online. It’s akin to a treasure hunt.

The beauty of this is that locals hide these caches in the most scenic places so you get to see sites you might otherwise pass by. Find out more about Geocaching and read about this particular cache.

We followed the Geocache coordinates, which led us down an overgrown path beside the River Lerna. We continued along the path toward the sea and a beautiful, magical view greeted us.

Where the river met the sea, an old wooden bridge set the scene, with a backdrop of sea mist hovering over the ocean.

It’s these little-unexpected pleasures that make the journey almost more important than the destination.

The particular geocache we found, gave us information about a concrete compass in the nearby area. It was apparently built by the Germans and originally had a canon in the middle pointing towards the town of Nafplio across the bay.

On our way, we came across ‘Constantinos’, an elderly Greek gentleman who was clearing the overgrown reeds near the river. With excellent English, he started up a conversation and proceeded to tell us about the Greek history of the area, including the story of Hercules and the many-headed snake, Lernaean Hydra, which had its lair in the area.

He told us about his favourite philosopher, Plato (of course), and his favourite quotes. Constantino was quite the storyteller, regularly laughing between his ever-increasing divergent stories.

In his younger days, he had been a bartender and travelled through the US, which explained his great penchant for spinning a yarn.

He explained that he was clearing the river surrounds of his own accord and was upset that they had been left to overgrow.

Reluctantly, he let us go on our way, leaving us much wiser in aspects of Greek mythology and the many inventions which originated in Greece.

To be fair, our first impressions of Nafplio weren’t great.

Busy traffic and the huge car park weren’t quite synchronised with our expectations of a small, picturesque town.

An online article in the ‘Telegraph’ stated it was, a serious contender for the most beautiful Greek town, and numerous other articles had exulted its beauty.

We tried not to judge on first impressions and made our way to the old town, through narrow streets, and onwards to the ruins at the top of the hill.

On the way, at the tip of the headland, we came face to face with ‘The Five Brothers’.

The ‘brothers’ are five canons that point out towards the bay. From here you get a great view of the Bourtzi Fortress, situated just off the coast on a small rocky islet. This is apparently the most photographed iconic spot of Nafplio.

Perhaps we had raised our expectations too high, but we still weren’t feeling the magnificent splendour that others obviously do in this ancient town.

As we walked further up the hill we came to the walls of the oldest castle in Nafplio, Acronauplia. The ruins were quite impressive but I was much more taken with the multitude of prickly pear plants growing along the walls.

To be fair, we had seen quite a few ruins in Greece, another reason why we weren’t as impressed perhaps.

SORRY NAFPLIO: WE’RE JUST NOT THAT INTO YOU

Overall, the old town area was worth a visit, and you may find, as many seem to do, that you fall in love with Nafplio.

For us, however, there was no love at first sight, not even a desire for a second date.

It was a, ‘Thank you but we’re just not that into you.’ from us.

We did enjoy the journey from Monemvasia to Nafplio though and it’s the journey not necessarily the destination, that is often the most enjoyable.

The plan had been to overnight in the ‘prettiest town in the Peloponnese’ but the vast port car park wasn’t exactly enticing for us.

Consequently, we decided to head off to find somewhere a little less busy and more scenic.

Hopefully, we’d find a stopover in a more appealing location as we set off towards our next destination, Corinth.

The journey, not the destination matters.

MONEMVASIA TO NAFPLIO … That’s a Wrap

We’d love to hear what you thought of Monemvasia or Nafplio and remember we are happy to answer any questions you may have on travelling the area in a motorhome.

If you enjoyed this pin – Save and Pin for Later