Brough of Birsay, Orkney: How to Visit and What to See 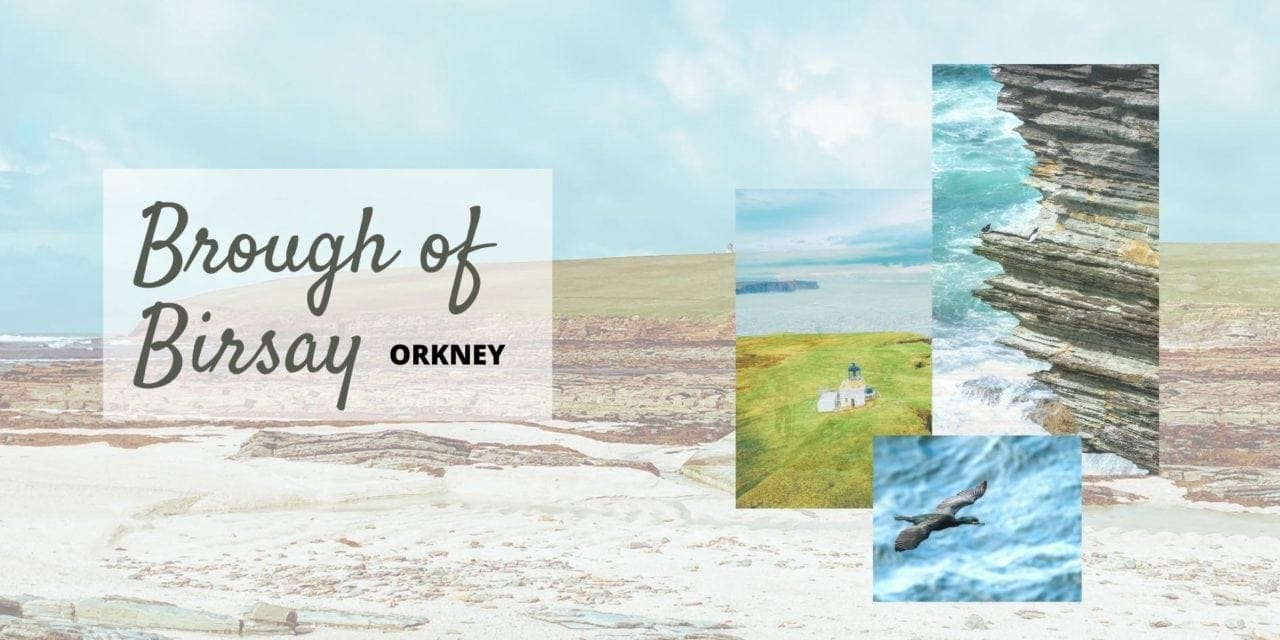 Home » Destinations » Brough of Birsay, Orkney: How to Visit and What to See

The Brough of Birsay is a small island off the northwestern coast of mainland Orkney that can only be reached via a causeway at low tide. As well as its cliffs being full of sea birds, it holds the secrets of the ancient civilisations that chose to call this place home. The weather pounds it, and the wind rarely stops blowing across its bleak landscape.

But a visit to the Brough of Birsay, most locals told us, is one that should not be missed on a visit to Orkney.

There are two walks that you can embark upon at the Brough of Birsay. One is around the island itself, and isn’t actually on the Brough, but is along the coast towards the Skiba Geo Bay, just to the east of the Brough carpark.

As long as the tide is out, you can walk around the Brough of Birsay itself. After crossing the causeway, there is a slight incline up to the island from the beach. In front of you, you’ll find the remains of ancient settlements.

Tip: If you have children with you, download this quiz about the ruins and the island to make the visit more interesting for them

We took about an hour to walk around the cliff tops of the island.

The Skiba Geo footpath along the coast can be taken at any time.

Ancient Settlements at Brough of Birsay

Evidence of life on the island is thought to date back to the 6th century, with the Picts being the first inhabitants. By the 9th century, Norwegian Vikings settled here, building on top of the previous settlements.

Here you’ll find a maze of walls from the Norse settlements, outlines of longhouses and remains of a medieval chapel.

It is free to wander the grounds.

The visitor centre, run by Historic Environment Scotland opens from mid-June to the end of September.

Heading westwards and following the cliffs, the path takes you to the island’s highest point, where you’ll find the Brough of Birsay lighthouse. Engineer, David Stevenson designed the lighthouse in 1925. In fact, Stevenson designed 26 other lighthouses in Scotland throughout his lifetime, including that at Rattray Head, on the Aberdeenshire Coast.

Although relatively small for a lighthouse, at only 11 metres tall, it stands at 52 metres above sea level. The lighthouse’s interesting castellated design gives it an air of importance on the Brough’s cliffs, on the furthest northwest tip of mainland Orkney. It is powered by 36 solar panels and 4 wind turbines.

Once you reach the summit of the Brough, you can qualify to ‘hill bag’ this Tump. A Tump is defined as ‘a hill separated from adjacent tops by a height difference of at least 30 metres on all sides.’ Head over to the Hill bagging site and log your achievement;)

At the Brough of Birsay car park, you’ll see a sign pointing to the Skiba Geo trail. A walk alongside this bay takes you past a restored 19th century stone fisherman’s hut and a whalebone perched on a pole.

The fishermen’s hut is built into the side of the cliff and the large indentations on the landscape around it are ‘nousts‘, a boat-shaped hollow that was used to store boats and protect them from the weather.

The whalebone, found a little further along the path, is the remains of a whale washed up on the shore back in the late 19th century.

The Brough of Birsay cliffs are perfect for the seabirds that flock here in spring to begin their nesting season. Among other birds, you may see gannets, razorbills, shags, guillemots and puffins.

We spotted a male and female eider duck relaxing at the top of the brough and plenty of guillemots, razorbills, and gannets soaring around the cliffs.

Out in the churning Atlantic Ocean below the cliffs, there is also a chance of seeing orca, minke whales, dolphins and seals.

The Brough of Birsay is apparently one of the best places to spot puffins on mainland Orkney. However, you will only find them from late April to the beginning of August because they then head back out to sea, where they remain until the next year’s nesting season.

Known locally as Tammie Norries, these colourful clowns are always a favourite of wildlife spotters.

We managed to capture a shot of a few flying by, near the cliff face by the lighthouse but didn’t see any on the rocks. A local told us that she regularly sees them on the east of the island just around the corner from the Viking settlement.

If you are looking for puffins on the Brough of Birsay, look for the grassy areas at the top of the cliffs, because puffins need to lay their egg in a burrow so you won’t find them nesting on the cliff ledges like many of the seabirds.

Another, and arguably more popular place for the puffins to nest is Westray Island to the north of the mainland Orkney. A couple of places of note are; Stanger Head and Castle O’ Burrian.

Getting to Brough of Birsay

Driving to Brough of Birsay

The carpark for the Brough of Birsay, Orkney is at Point Buckquoy, opposite the island and next to the steps leading to the beach where you’ll find the zig-zag concrete causeway.

If you are driving from Kirkwall to Brough of Birsay, the direct route will take about 30 mins. However, you may wish to include other attractions on your way, in which case choose the more westerly route, which takes you past the Stones of Stenness and the Ring of Brodgar.

Can you Walk to Brough of Birsay?

Yes, you can walk across the 100m concrete causeway from mainland Orkney to the Brough of Birsay. However, you can only cross at a certain time of the day, at low tide.

The steps from the car park at Point of Buckquoy lead to the beach and you will need to walk over some rocks and seaweed before you step on the causeway.

Be careful, because it can be wet and slippy.

When Can I Cross to Brough of Birsay?

You can only cross to the Brough of Birsay for two hours on either side of low tide. You will need to check the times of low tide and plan your crossing accordingly.

This table below is taken from the Uk Mat Office and shows tide times for Brough of Birsay on a certain day.

When you plan your crossing of the causeway to the island, make sure you leave enough time to explore the island and to get back across. You basically have a four-hour window.

Extra Information on the Brough of Birsay

On the sandy parts of the beach, are many shells and if you look carefully you may find a cowrie shell, known locally as ‘Goatie Buckies‘ because they are like the shells commonly found at John O’Groats. Local folklore says that if you have a Goatie Buckie in your purse, you will always have money.

We saw several people looking at the ground for shells but didn’t realise what they were doing at the time. Given their magical properties, I’m guessing that it’s becoming harder and harder to find one.

The rock pools are fun to hunt around too, and you’ll find plenty here.

How do you pronounce Bough of BIrsay?

Almost opposite the Brough of Birsay, sits the crumbling ruins of what was once the Ist Earl of Orkney, Robert Stewart’s, lavish four-storey palace. He was the illegitimate son of King James V and half brother to Mary Queen of Scots. Unfortunately, his rule was tyrannical and he used forced labour to build his properties.

His son, Patrick Stewart, the 2nd Earl of Orkney built the other Earl’s Palace, next to St. Magnus Cathedral in Kirkwall.

It is free to visit the Birsay and worth a look if you are visiting the Brough of Birsay.

Brough of Birsay… That’s a Wrap

Lovers of history, wildlife and wild coastal walks will enjoy a visit to the Brough, and if you are visiting in late spring and summer, the addition of visiting seabirds and wildflowers will add another element to your visit.